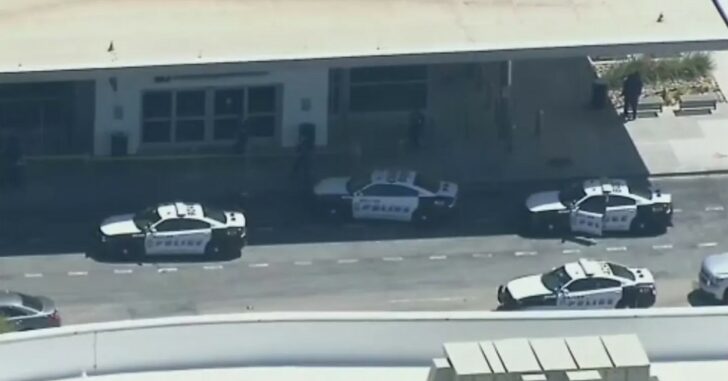 DALLAS, TEXAS — A 37-year-old woman is in the hospital after police say she opened fire near the Southwest ticket counter at Dallas Airport this morning. The woman was dropped off at the airport and is then seen going inside, eventually making her way to the bathrooms. Police say she enters the bathroom and re-emerges with different clothing, then produces a handgun and starts firing.

A Dallas Police Officer was there and engaged the suspect quickly, striking her in the lower extremities. She was taken into custody and is currently at the hospital.

Video allegedly from the scene seems to show officers engaging the suspect, who cannot be seen on camera. This also seems to have taken place just outside one of the entrances to the airport.

37-year-old hooded woman shot by police after opening fire at Dallas’ Love Field Airport. She was rushed to the hospital. No others injured pic.twitter.com/hHSnNF3ILK

– Woman began firing handgun; unclear where she was aiming.
– Officer engaged suspect, who has been hospitalized.
– No one besides suspect was injured.
– Not an active situation.https://t.co/7SgVTIE0iy pic.twitter.com/RkhnaQZHpl

Police aren’t certain where she was firing the handgun, but several rounds were said to be fired at the ceiling.

There are no reports of injuries other than the suspect.

Breaking: Dallas Love Field Airport in Dallas, Texas, is on lockdown due to reports of a shooting. pic.twitter.com/Ude1LxLNMN

Previous article: You Are Not A Christmas Tree For Your Gun Ornament Next article: I Asked An AI Writing Program What The 2nd Amendment Means, And This Is What I Got