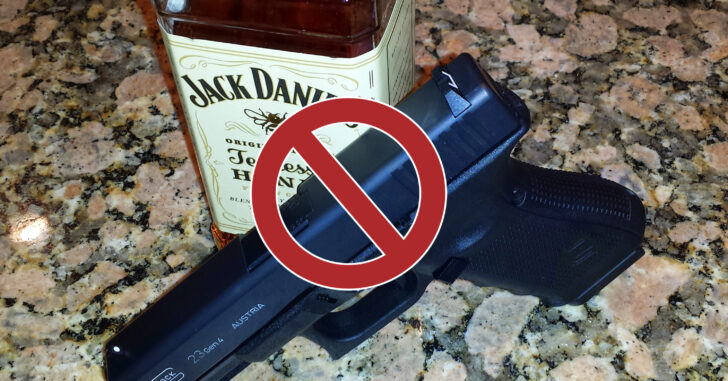 On September 28th 2013, I quit smoking cigarettes. It was one of the most difficult things I have ever had to do, but I got through it and will be celebrating 1 year of being smoke free in less than two months. About two years before I quit smoking, I decided to stop drinking alcohol (I never really drank that much anyway). The reason that I decided to kick alcohol completely was because I now carried a firearm everywhere I went. I gave a really hard look at the possible outcomes of even having one drink while carrying, and then made my decision. So, what were my reasons?

First off, this is an opinion article. Anyone who decides to rip me a new one for my thoughts, I’ll share this with you right off the bat: I appreciate your comments, but these are my own personal rules that I incorporate into my life. Even though I have written this article, you are still able to do as you please if you don’t agree with me. I promise.

My BAC get’s weird after a single beer

Being 5′ 7″ and 130 lbs, I’m sitting at a BAC of %0.028 after just one beer. While not legally intoxicated, it’s still enough to fluff up your head a little bit. Actually in some states, there are laws on the books that make it illegal to carry a firearm if your BAC is over %0.02 which would make myself breaking the law before I even finished my first beer.

I still have quite a few friends who enjoy going out for drinks and being in New York State, I can legally carry inside an establishment that serves alcohol. Now I do have a problem with carrying inside a bar even if I’m sitting there with friends sipping on a Coca-Cola. I simply won’t do it. Bars are that special type of place where people tend to get out of control before you even realize what’s going on. You may not even be a part of it and find yourself… a part of it.

There have been plenty of times in my past where I’ve been in situations at a bar that, had I had a firearm on me, it would have been touched by someone else or possibly even exposed. This is not something that I would want to happen, so I simply don’t go into bars while carrying.

I will however, go into a restaurant that serves alcohol and sit at a regular table or booth with friends. Still, the alcohol will be served to everyone but myself.

Stay on top of your game

Going back to my BAC reference from earlier, I’d be slightly foggy after a single beer. Sure I’d be able to walk straight, talk normally and do pretty much everything just as I would have before the beer, but why impair yourself at all? You, just like myself, carry a firearm to be prepared at a moments notice in case the unthinkable happens. Throwing anything in your path that could slow you down even the slightest bit is giving you more of a disadvantage.

If something happens, you have some explaining to do

You’re at a bar having a beer with your friend. Out of no where, your wife’s ex charges you with a knife. You pull your firearm and shoot. Now, you’re going to court because the man’s family is suing you for who knows what. The fact will remain that the lawyer on their side is certain to bring up the fact that you were drinking a beer. The outcome could not be in your favor simply because you had a drink. Again I ask, why even chance it?

It just sounds inherently dangerous. Once you start carrying a firearm, you’re now playing by big boy rules. Just as you shouldn’t be mixing alcohol with driving, the same thing should hold true for mixing alcohol and firearms. It’s obviously a free country and people can do as they see fit. It’s also obvious that I’m going to get some hate for this article.

There is a great thread over at DefensiveCarry.com that deals with this exact topic. There, you can read 9 pages of comments from many different people.

Maybe I’m too strict with my personal zero-tolerance policy, but that’s just the way that I roll.