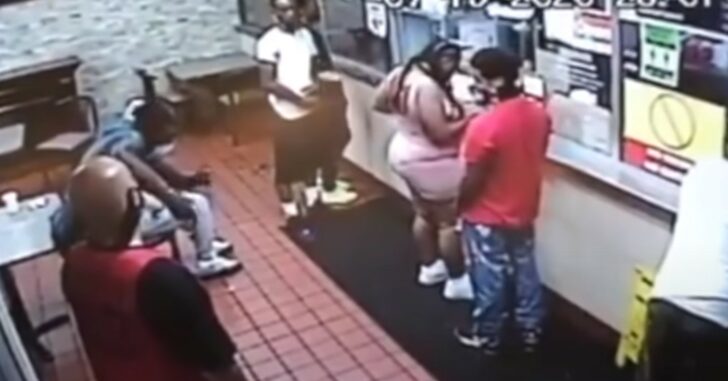 In Detroit Sunday evening, cops say an armed robbery convict on parole pulled out a gun and shot three people before the first one hit the floor. His rounds killed two of those men and he went on to kill a third man outside to steal his car to make a getaway.  Fortunately he wore a face mask so as not to spread the Chinese virus.

The video below shows just how quickly the scene unfolded. And frankly, it is very graphic.

Something obviously happened between these people, either at the restaurant or before that evening.  Either way, it looked like something out of Chicago.

After shooting the three people on the left side of the window, he started shooting out of the door as panicked customers tried walking under his gunfire. Talk about a Chinese fire drill.

At approximately 11 p.m. in the 9100 Block of Dexter, four men in the Eagles Coney Island on the city’s west side were shot. Three of them sustained fatal injuries while a fourth was last reported to be in critical condition.

An employee said they didn’t hear any argument or fighting that led up to the shooting. All they heard were gunshots.

Detroit Police arrested a suspect in connection with the shooting at an alley on Tennyson near Oakland Parkway.

During an afternoon press conference, Police Chief James Craig said a 25-year-old man with an extensive criminal history was arrested for the shooting.

He said it appeared the suspect had a brief conversation with one of the victims before pulling a gun but didn’t appear to be agitated.

“We just don’t know why, another senseless shooting,” Craig said.

He didn’t release the suspect’s name but said he did time for robbery and that he was currently parole.

Click on Detroit identified the accused killer as Mickey Douglas, a parolee who had been serving 5-20 years for a 2013 armed robbery.

Previous article: CA No-Bail Policy, Due To Coronavirus, Sees Man Arrested For Auto Theft 13 Times In 12 Weeks Next article: Afgan Teen Uses AK-47, That Her Father Taught Her To Use, To Kill The Taliban That Murdered Her Parents