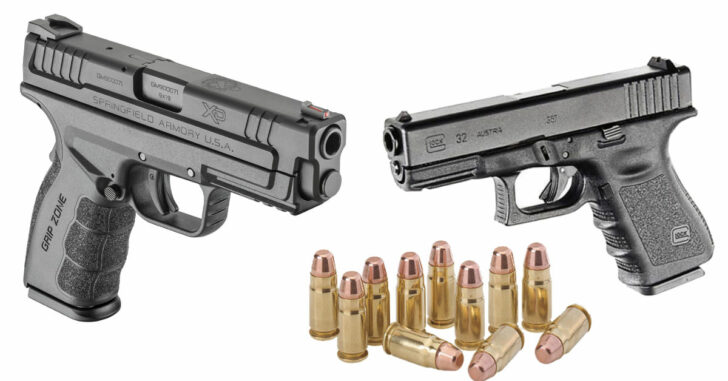 A couple years ago, ammunition prices were ridiculous. I’m sure some of our readers can remember. All of the sudden, bulk full metal jacketed rounds were just skyrocketing. For those of us who practice regularly — at least once a month — that can put a serious dent in expendable income.

For this reason, my wife and I decided to pare down our handgun selections in preference of a single caliber. Our reasoning was that if we picked one standard caliber — i.e. 9mm, .40 S&W, .45 ACP, etc. — we could easily interchange the pistols we own and still be able to practice regularly.

The market eventually caught up to demand and bullets were back down into a reasonable price range. However, I get the feeling my wife and I weren’t alone in this decision to go all one caliber for our handguns. I noticed, recently, a LOT of handgun specials going on for pistols chambered in boutique calibers like .357 SIG and .40 S&W.

As a good consumer, I instantly went on my phone to check out bulk ammunition in those calibers. Lo and behold, even though the prices for bulk FMJ for .357 SIG and .40 S&W weren’t close to 9mm, they weren’t too terrible either.

Prices for .357 SIG and .40 S&W have come down. These two calibers represent just two boutique ammunition calibers that definitely serve a purpose but are usually not as well supported by different manufacturers… The .357 SIG round being a primary example of that.

Glock supports the .357 SIG. Sig Sauer obviously does. And there’s still a few other major gun makers who produce handguns chambered in those calibers.

The .40 S&W round, smaller than the .45 ACP and shorter than the 10mm, is a round that is heavily supported but has somehow gone “out of vogue” in the gun world. All of the sudden, all of the jazz around using a heavier, higher penetrating round than the 9mm became less of a priority than the price of ammunition.

There’s also the issue with pistol RMRs and optics sometimes not covering heavier caliber rounds like the .40 S&W. That’s a whole completely different topic and it’s not one particularly of interest to my family. We don’t own any handguns with RMRs.

So, recently, we had a friend who wanted to sell his Sig P229 chambered in .357 SIG. It was a good German model with a solid frame. Heavier than my typical everyday carry, I really liked how it fit my hand.

My wife and I took it to the range and bought a couple overpriced boxes of .357 SIG FMJ to test it out.

Wow. My mind was blown.

The .357 SIG round is just a very tight round that packs a bigger whollop than the 9mm but is still somewhere between the 9mm and .40 S&W in terms of handling. I really liked it. My wife seemed to like it, too.

Should we break ranks and adopt another pistol ammunition caliber in our house?

The choice became even more evident when Black Friday rolled around and we wandered over to our local gun shop. She found a New In Box Springfield XDS Mod 2 4″ Service Model for $379.

Suddenly, I was stuck being the stick in the mud talking about pistol ammunition prices.

I agreed if she got her pistol, I get to get mine. Now we needed to cover down on ammunition for both — that included defensive ammunition rounds for carry and magazines.

Between online sales and Mecgar for Sig Sauer magazines, we ended up with four magazines for each, ammunition, defensive rounds, holsters, and both pistols for less than $1,300.

Our main caliber for our handguns is still 9mm. It’s a reliable round, easy to handle, cheap to purchase, and space efficient for storage. However, we’re beginning to realize that as ammunition prices stabilize and the various gun stores offer steep discounts for good pistols in odd calibers, we just couldn’t pass up on the savings.

So, diversity in the concealed carry world may include, at times, adopting ammunition calibers we would otherwise not consider — so long as the choices align with our practice, carry habits, and personal tastes.