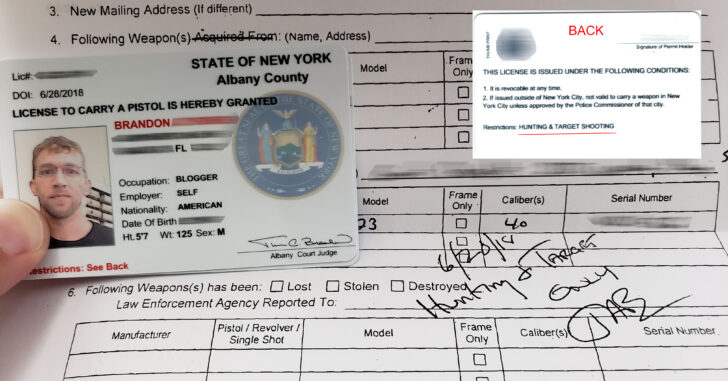 If you haven’t been following along, make sure to read the following articles first to catch yourself up:

Have you caught yourself up with the two above articles? Alright good. We’re ready to move onto the present.

While on a trip to New York, I had to head over to the County Clerk’s office in Albany County to get some paperwork done for my permit after the recertification was completed. It was a relatively easy process. I listed all the firearms that I still own (pistols), which is required for New York State. I then got my picture taken for my new card-based permit. Prior to the new card system, permits were simply pieces of paper with your photo glued onto the front.

I handed everything in, paid the $5 fee for the new permit and left the building.

A few weeks later, I received my amendment form and new permit in the mail. SCORE! I was in possession of the rare New York State Non-Resident Pistol Permit. It had happened.

If you’re lost, this means that you didn’t read the two articles above. Seriously, go read them.

As I marveled over my new pieces of plastic, I noticed something rather quickly… On the front of the permit in the lower left it read; Restrictions: See Back

I first thought that this was a standard message, since many (if not most) if the permits issued are with restrictions. These usually come in the form of Hunting and Target Only, which translates to you being able to carry only while hunting and target shooting, as well as going to and from those things.

I flipped the plastic baby over and wouldn’t ya know, I had those restrictions. It was surprising because when I first received my permit in 2010, it came with those restrictions. I wrote a letter to my judge at the time and asked to have the restrictions removed. You can read all about that story here, and what happened to my father as well.

So for the past 8 years, I have been in possession of an UNRESTRICTED permit in New York, which means that I can carry everywhere aside from NYC, and of course any locations that are banned on the State or Federal level.

So now, I have a new amendment ready to hit the mailbox tomorrow morning asking for yet another duplicate permit that displays no restrictions. Along with the amendment is a letter to my judge which explains why I feel I should have these restrictions removed. It’s a process but if you want a permit in New York, this is the way it goes until things change one day.

This re-certification process, as enacted by the SAFE Act a few years ago, may be one way that allows judges to throw restrictions on previously unrestricted permits. I purposely didn’t file any amendments after the SAFE Act was enacted because I did not want to run this risk, and I know of many people who did the same. This time, though, I was forced to re-certify and file an amendment to get done what I needed to get done; mainly an address change.

In the mail it goes, and we’ll have to see what comes of this in the coming weeks. My judge is usually pretty quick to get things processed, so my hope is that I receive my new, Unrestricted permit, within 3 weeks.

Previous article: Do You Have A Record Of The Firearms You Own? Next article: Judge Drops Firearm On Floor, Charges Filed, What We Learned *WATCH*