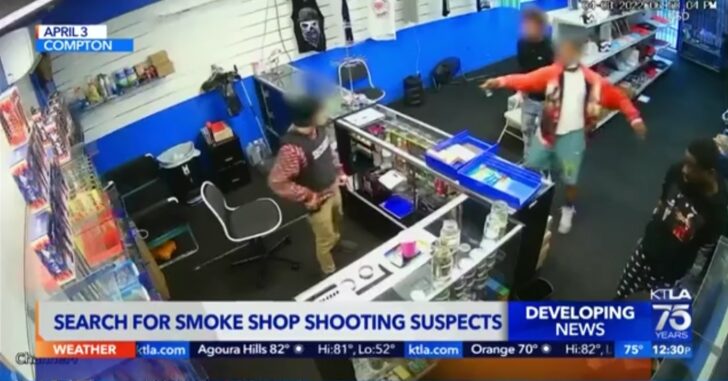 COMPTON, CALIFORNIA – One of four armed robbers was fatally shot by a smoke shop employee who was also armed, another was arrested, and two are still at large. The Los Angeles County Sheriff’s Department says that the incident occurred just before 7 p.m. in the 1500 block of South Wilmington Avenue.

A group of armed men entered the business and pointed handguns at an employee behind the counter. Against four-to-one odds, the employee surprised the suspects by drawing his own firearm. A gun battle ensued as the men ran toward the exit, returning gunfire while tripping over each other. They eventually made it out of the store.

The entire incident was captured by the store’s video surveillance cameras. The employee, an armed security guard, was treated for gunshot wounds to his face and neck at a local hospital and released.

About a half-hour after the attempted robbery, deputies were called to Martin Luther King Hospital in reference to a gunshot victim.  They found that the injured person was one of the suspects and it is assumed that he was shot by the employee. He later died at the hospital, and authorities have not yet publicly identified him.

No specific details were released, but police say that a second suspect was arrested the following day.  They are now seeking Kahlel Malik Lundy, 23, and Keith Terrion Rachel, 21, whom they have identified as the remaining two suspects in the video. Both are wanted for murder, since one of their accomplices died during the commission of a felony crime that they participated in.

Previous article: Here's A Sloppy Self-Defensive Gun Use That Ends Up Being Effective Next article: Woman Pulls Gun On Clerk After She Refused To Wear A Mask