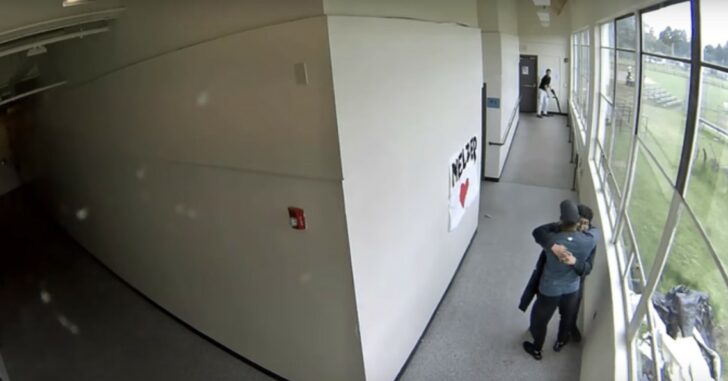 At Parkrose High School in Oregon, things could have ended much differently if the school security guard, who is also a football coach, wasn’t there when a student was armed with a shotgun.

The incident was captured on school surveillance video and recently released by police, although it occurred in May. It shows the security guard, Keanon Lowe, acting quickly when 18-year-old Angel Granados-Diaz presented a threat to everyone inside a classroom.

The big difference here; the incident ended with a long hug.

“I saw the look in his face, look in his eyes, looked at the gun, realized it was a real gun, and then my instincts just took over,” Lowe said. “I lunged for the gun, put two hands on the gun.”

Posting to Twitter, Lowe reflects on the incident, never thinking that he’d have to encounter an armed student.

When I signed up to be a Security Guard, Football and Track & Field Coach for Parkrose High School, I did so to guide and coach young people whose shoes I had once been in. I had no idea, that I would one day have to put my life on the line like I did yesterday for my students.

In the video, Lowe is seen grabbing the shotgun from the student and holding it away from him. Another faculty member, who initially ran in the other direction, came back to get the shotgun from Lowe and secure it further away.

Then, Lowe is seen bringing the teen close to him, wrapping his arms around the troubled child.

“I felt compassion for the kid, to be honest,” Lowe said. “Obviously, he broke down and I just wanted to let him know that I was there for him. I told him I was there to save him. I was there for a reason and that this is a life worth living.”

The shotgun was loaded, but only had one round available.

The teen faced multiple charges, where he received a 36 month probation. He is also not allowed on any school grounds, and needs to undergo substance abuse and mental health treatment.

Give the video a watch below:

Parkrose High School football coach @KeanonLowe saved lives when he stopped a student with a gun.

You’ll never believe how he did it.pic.twitter.com/jFegWZtBxW

Troubled people are everywhere, and some just want to be heard. It’s sad that a few believe that a violent protest against the world is the way to go, but let’s be happy that people like Lowe are around to handle these situations in the best ways possible.

Previous article: [VIDEO] Clerk Absolutely Takes Control Over Robbery, Eventually Grabbing Robber's Gun After He Leaves It On The Counter Next article: After Unresolved Argument, Man Shoots Friend Who Forced Their Way Into House