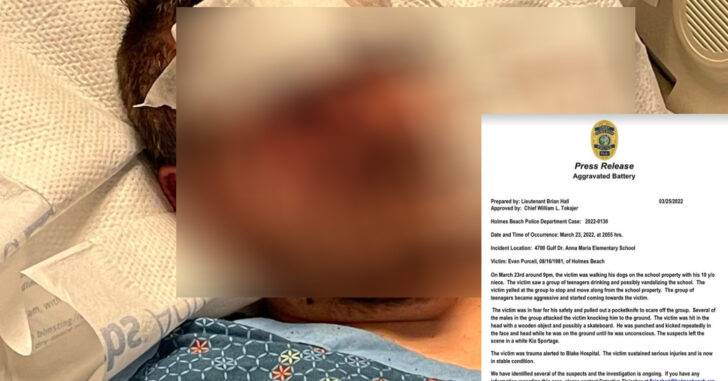 ANNA MARIA ISLAND, FLORIDA — More details were made public today in the nearly deadly incident in Florida where a man was beaten by a group of teens near an elementary school. The man attacked, Even Purcell, suffered multiple fractures to his face and required surgery.

Purcell and his 10-year-old niece were walking their dogs when they saw a group of teens drinking and possibly vandalizing the school. Purcell yelled at them to stop and leave the area. The group became aggressive with Purcell and as they approached, he pulled out a pocket knife in an attempt to scare the group.

“Several of the males in the group attacked the victim knocking him to the ground. The victim was hit in the head with a wooden object and possibly a skateboard. He was punched and kicked repeatedly in the face and head while he was on the ground until he was unconscious. The suspects left the scene in a white Kia Sportage.”

Police say they have identified multiple suspects and the investigation is ongoing.

The new pieces of information we have are; that Purcell said something to the group prior to the incident, and that Purcell displayed a knife as the group became aggressive.

The number in the group isn’t known, but if you’re up against multiple attackers, a pocket knife isn’t likely to do you much good. And in this day and age, even some kids are capable of things we couldn’t imagine.

If Purcell had a firearm, would he have negated his ultimate trip to the hospital? We’ll never know. But if I’m up against a number of people at the same time, I’d like my chances a lot more with a firearm. Still, you need a plan for when things go south, and two of your goals in an encounter such as this would be to create distance and make damn sure you retain control over your firearm.