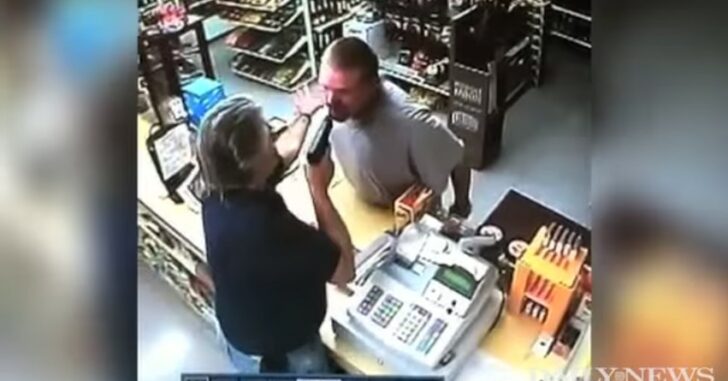 Ahh, what a refreshing turn of events we see unfold in this short clip. A robber decided that he would walk into a store and make some quick money. Little did he know, the store clerk was in the military for 30 years and worked many “high-risk” jobs in the past.

Meet 54-year-old Jon Lewis Alexander. He has been deployed to Iraq four times and has been trained to handle much more that being robbed at a store.

The would-be robber comes into the store, cigarette in mouth, determined to leave with some cash. Before he can even get his gun up, Alexander throws his arm out to sweep the robbers gun aside and pulls out his own gun on the unsuspecting robber. I can only imagine that, once he smelled the gun oil right after Alexander’s Walther PPX9 was up against his nose, he may have soiled himself a little before retreating.

No one was hurt in the incident and not a single shot was fired.

What an unfortunate series of events for the robber. Just imagine with me for a moment, if you will, that we have armed citizens like this all over the country. I’d be willing to bet that crime would decrease dramatically. Ahh, progress.

Previous article: CA lawmakers want 'Gun Violence Restraining Order' which sounds like a scary bill that will be open to abuse Next article: The NRA gives their stance on Open Carry Demonstrations in businesses