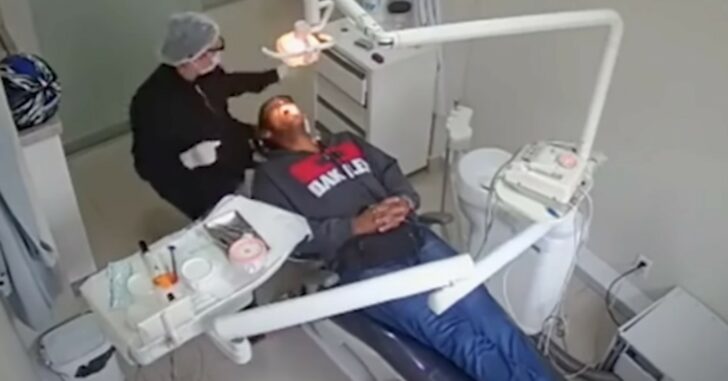 When I moved to Florida, I had to find all new doctors and such. As it turns out, I’ve become friends with many of them and they’re all gun-friendly people. I like to carry everywhere I go, including places like the chiropractor, and don’t want anyone freaking out when I empty my pockets and take my gun off prior to my adjustment.

The dentist is a different story, but I still struck up a conversation with my new dentist on day one, and it turned out he’s a gun guy. Or at least gun-friendly. Either way, I carry at the dentist as well, even though some would say I’m overly paranoid.

Imagine what they’d think if they knew I carried at home all the time as well. You know, that place where 100% of home invasions occur?

Getting into our story, a man is in the dentist chair in a pretty vulnerable position, when two men armed with knives decide to barge in and shake everyone down. They happened to choose the room that the patient was in to congregate everyone, and it takes him a moment to realize what’s going on.

He’s actually an off-duty police officer who has his gun in the appendix position. He quickly gets on the floor and plays as though he’s surrendering, although he’s actually trying to draw attention away from the area that houses his gun, and likely preparing for a moment to draw.

Backup showed up a short time later, and we get a wild video to process.

Previous article: Robber Shot In The Face By Armed Guard The Second He Comes Through The Door Next article: Lock Your Doors, People, Because Naked People Want To Kill You