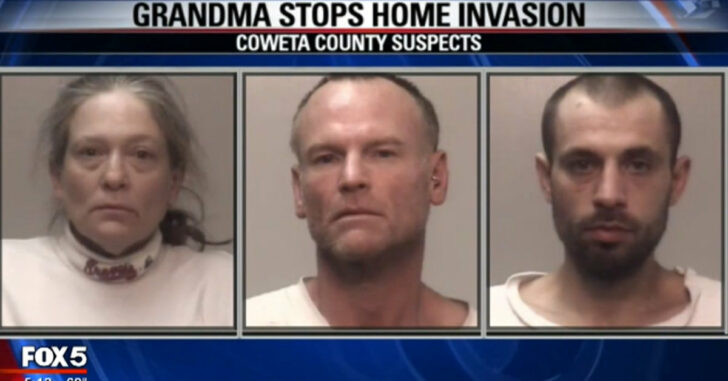 COWETA COUNTY, GEORGIA — An elderly woman was able to send two burglars running after she heard a noise coming from an out-building. The burglars were rummaging through her possessions to find furs and other items of worth before she caught them in the act. When they saw she was armed, they fled.

According to FOX 5 News Atlanta, neighbors saw the two burglars jump into a vehicle and a getaway driver ferry them off. They gave a description to the police who then promptly pulled the vehicle over and discovered the group was in possession of stolen property.

“I don’t know why they selected that house, but they picked the wrong one,” Colonel James Yarbrough from the Coweta County Sheriff’s Office said to FOX 5 News.

The grandmother’s correct and judicious use of a firearm is being credited as one factor why this incident concluded itself so smoothly. She was able to correctly identify the thieves and even attempted to inquire as to what actions they were taking on her property prior to aiming her pistol at them.

As for the two burglars, it looks like they’re very fortunate they picked a kind, elderly woman’s house. Many other gun owners in Georgia wouldn’t have hesitated to use deadly force — especially considering one of the burglars was armed with an illegally possessed handgun.

This is why we take home defense so seriously. The target of these attacks can be anyone — your grandmother, yourself, or even a neighbor. That’s why we also look out for our neighbors. Simply keeping your eyes open and noticing when something is amiss can turn into having something to give police when they’re called.

As a community, we have to take care of each other. We have to know when something is out of place and always defend our own household first before dealing with someone else’s. Being a law-abiding gun owner and a good neighbor can often go hand-in-hand. As for this grandma, she’ll be able to sleep a bit better at night knowing that there’s three fewer hoods targeting her house.

Previous article: #DIGTHERIG - Tom and his Smith and Wesson M&P Shield 9mm in a DeSantis Holster Next article: BEGINNERS: What To Expect The First Time You Carry A Firearm