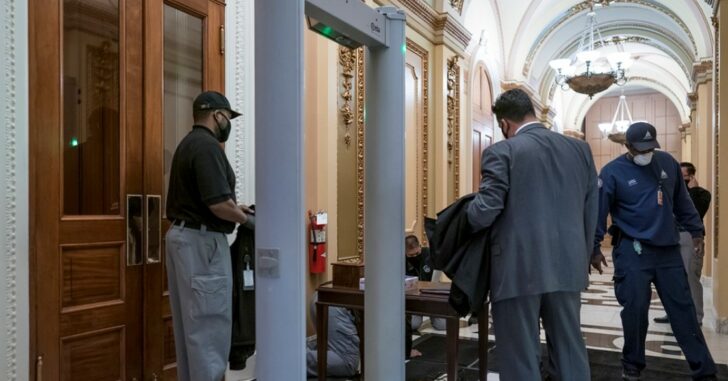 A Republican representative attempted to bring a handgun into the House chamber the other day, and was greeted with freshly installed metal detectors, courtesy of the incident that happened on the 6th of this month.

Rep. Andy Harris, R-Md., set off the metal detector while trying to enter the chamber Thursday afternoon. The metal detectors were installed after the Jan. 6 insurrection at the Capitol, which left five people dead, including a Capitol police officer. The incident was witnessed by a reporter from the HuffPost website.

After setting off the machine, Harris was asked to step aside for further screening. At that time, an officer discovered Harris was carrying a concealed gun on his side, according to the reporter.

Harris left and returned about 10 minutes later, successfully walking through the metal detectors.

Harris issued a statement through his chief of staff, Bryan Shuy.

“Because his and his family’s lives have been threatened by someone who has been released awaiting trial, for security reasons, the congressman never confirms whether he nor anyone else he’s with are carrying a firearm for self-defense,” the statement said. “As a matter of public record, he has a Maryland Handgun Permit. And the congressman always complies with the House metal detectors and wanding. The Congressman has never carried a firearm on the House floor.”

Many lawmakers carry firearms on Capitol grounds, but are restricted in doing so inside the House and Senate chambers. That’s not to say they didn’t do this, but it’s now impossible due to the installment of the metal detectors.

And since Capitol Police had such a hard time controlling a crowd on the 6th, everyone inside is literally defenseless.

House Speaker Nancy Pelosi, D-Calif., has proposed a rule that would fine members who bypass the metal detector $5,000 for their first offense and $10,000 for their second. The fines are not yet in effect, because the House has not adopted the rule.

And so it goes.

Previous article: Man Charged After Shooting Innocent Bystander While Trying To Defend Himself Against Armed Attackers Next article: Armed Mom Shoots Intruder Forcing His Way into Her Home, Saving Herself And 8-Year-Old Child