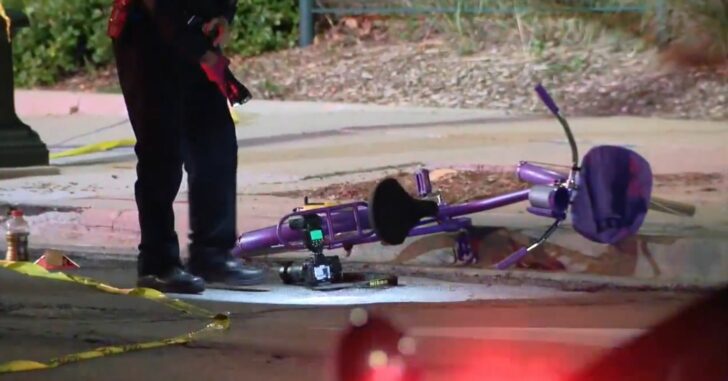 DETROIT, MICHIGAN — People make a lot of excuses for not taking their gun with them when they leave the house. A popular one is because they are going for a run or some other physical activity. The complaint being that it is too difficult to do with a gun around your waist. Well, this bicyclist found a way to carry her gun while on a bike, and it saved her boyfriends life.

Detroit police sources say the man was in an SUV and was upset with the cyclists riding on Jefferson.

He shouted at them and one of the cyclists shouted back, prompting the man to get out of the SUV and confront the vocal cyclist with a knife.

The cyclist’s girlfriend, who was an armed, Concealed Pistol License holder, fired a single shot killing the man. Detroit police placed her under arrest.

It is almost 11pm at night and a couple are taking a bike ride together. A man in a Land Rover doesn’t appreciate the space the two bicyclists are taking on the road and begins yelling at them from his window. In response, the male bicyclist shouts back; creating an altercation between the two men.

The driver of the Land Rover and the male bicyclist continue to bicker back and forth. Finally the driver pulls over and gets out of his vehicle. He exists the car with a knife that he brandishes towards the two bicyclists. The male driver is enraged and threatens the male bicyclist life. What the driver did not expect, was that the female bicyclist was carrying a firearm.

As the driver attempted to attack the male bicyclist, the female drew her firearm and fired one shot. Her shot was on target and it dropped the male driver. He would not recover from the gunshot, and died on the side of the road.

The police arrived, took the firearm, and arrested the female bicyclist.

Let’s give some accolades to the female bicyclist. If she can carry concealed while riding a bike, so can you conceal carry while doing your own physical activities. There really is no excuse anymore. There are plenty of good holsters designed specifically for this, and there are enough good micro guns on the market.

Like a lot of people, she could have just decided to leave her gun at home because it would be easier and more comfortable without it. Had she done that, her and her boyfriend could be dead right now. Instead, she made the effort and it saved her life.

That being said, getting in road rage incidents is never a good idea. Sure, we all get frustrated on the road from time to time, but truly what good can come from raging over it? If you find yourself in a situation with someone on the road yelling at you, it’s best to not engage. Let the person vent their frustration and be on their way.

The boyfriend in this case probably should not have engaged. However, the driver of the Land Rover most certainly should not have escalated the confrontation. When he got out of the car with a knife, it was the last decision he ever made. We don’t know details about the man, but certainly there is a family somewhere who will never see their son, brother, husband, or father again.

The bicyclist attorney has made the case that this checks all the boxes for a legal self defense shooting. Police afterwards agreed with the lawyer and are now investigating this as a justified homicide while they gather further evidence. Nearby cameras picked up the entire incident. If the footage plays out as the bicyclists say it did, the shooter should be free and clear of any charges.

Previous article: Felon Shoots 5-Year-Old NC Boy In The Head As He Rode His Bike In Front Of His Father's Home Next article: Federal Appeals Court Strikes Down California Ban On "High Capacity" Magazines