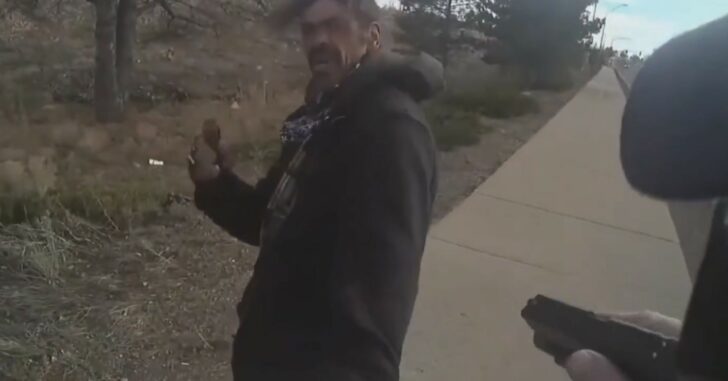 A video is floating around that shows an Arizona police officer talking with a man who is on a bike on the side of the road. The officer finds out that the man has an outstanding warrant and attempts to bring him in.

The situation escalates, as this man didn’t feel like going to jail. What the officer first thought was a knife, was actually mace. When the man pulled out the mace and sprayed in the officer’s direction, the officer fired his gun

The man was struck in the neck.

A suspect in Flagstaff, Arizona, was shot in the neck after pepper-spraying a police officer in the face (although the officer had sprayed him first when he resisted arrest). Matthew Dearing was taken to a nearby hospital, where he is recovering from his injuries. The officer had initially stopped him because Dearing had a warrant out for his arrest.

When talking about the use of proper force, one could argue that the man with the pepper spray could have blinded the officer and went for his gun.

Also when talking about the use of proper force, another could argue that a gun is not a suitable tool to use against a person wielding mace.