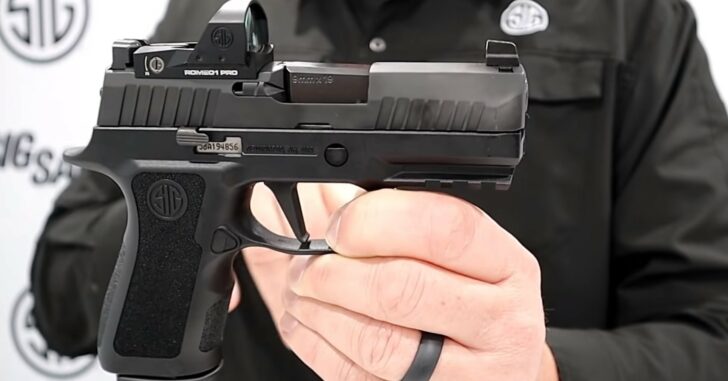 Every year, Sig Sauer creates an incredible showplace at Shot Show. There are so many firearms to learn and check out it really is amazing. As I was gazing at the new rifles for 2020, much of the Shot Show buzz was on their new handguns. For the record, this is nothing new. Sig Sauer typically outperforms the other firearm manufacturers with the vast amount of guns, optics and ammo they offer. They even had a large and fully loaded counter dedicated to air guns.

Sig knows better than anyone on how to take a popular model like the P320 and create many different variations. Different slide cuts, frame sizes, color combinations and caliber chamberings were all on display. The one that really caught my eye was the full-size Sig P320 X-Five Legion with the tungsten polymer frame that felt as heavy as a steel frame. Last year, Sig reintroduced the precise target Sig P210 model. I got my hands on that at the range and the accuracy was out of this world. This year, they announced a Sig P210 carry model that offers the same incredible craftsmanship in a smaller package.

Sig Sauer introduced a total of six new handguns this year. Everything from their very popular subcompact P365 SAS (Sig Anti-Snag) to the large X-Five models were on display. Several of their handguns are optic ready. Sig is calling this their red dot revolution. As concealed carriers are demanding red dots on their carry guns, Sig is on top of the game with pistols that are suited for optics.

This review gives quick and informational feedback on all six models from Shot Show. If you are a fan of Sig Sauer handguns, this compilation of the 2020 models is for you. Check out the attached video and let us know which of the Sig new handguns interests you. Share with us your thoughts and experiences on these or any other Sig Sauer handguns.