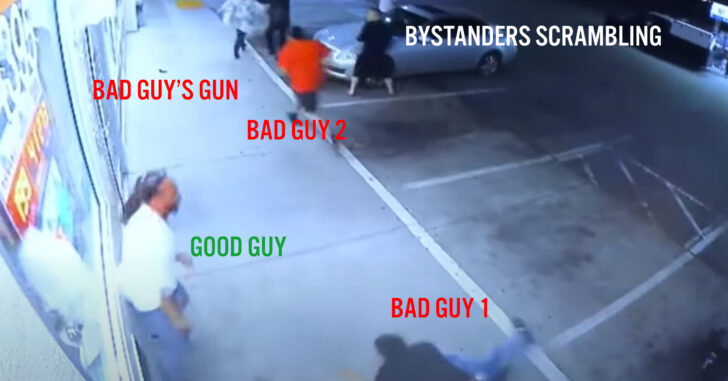 These bad guys were on a crime spree, and nothing was going to stop them. They were violent, displayed a gun, and even shot some people just because.

Many of the encounters were captured on surveillance video, which can be seen below. Their last encounter in the video was with a man who they thought would be another easy target, but this man fought back immediately.

He gets into a physical fight with the bad guy with the gun, and ends up successfully disarming him.

The good guy was by himself, however, and didn’t have many options while still entangled with the bad guy on the ground.

So, he throws the gun towards a group of people.

And that group of people wanted nothing to do with the situation.

That’s not surprising, considering a stranger threw a gun in their direction and they had absolutely no idea what was going on. I wouldn’t pick it up, either.

In the end, the other bad guy runs over to the gun and picks it up off the ground, and immediately goes back to his buddy and the good guy fighting. He pulls the trigger, shooting the good guy in the shoulder.

Watch the video below, learn some lessons, and stay safe.