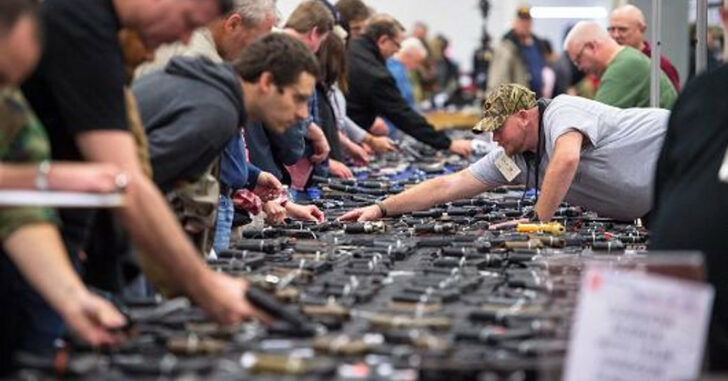 CLARKSBURG, WEST VIRGINIA — The FBI is having a little tantrum over the sheer number of background checks they have to conduct for the sale of firearms.  The National Instant Criminal Background Check System (NICS) is a mandatory background investigation process which has to be conducted, in most cases, for every purchase of a firearm through a licensed gun dealer.

Apparently, after President Obama’s stirring action on ‘gun control’, a lot of people turned out to pick up firearms that they were worried would be classified as ‘assault weapons’ (whatever the heck that means).  They also turned out in record numbers to apply for their concealed carry licenses.  Who woulda thunk that’d be the reaction?  In either case, the FBI is backlogged heavily for conducting NICS.  This is causing delays for those purchasing guns from gun stores.

“The last several months, we’ve kind of found ourselves in a perfect storm,” FBI Assistant Director Stephen Morris said in an interview with USA TODAY.

While the FBI redeployed 70 analysts to help with the backlog, the biggest group of people hit are those dealing with appeals.  Background checks aren’t perfect and there is a chance for error — especially with so many databases they’re checking against.  So when someone has their request to purchase turned down, they can (and do in most cases) launch an appeal.  The number of appeals goes up as the number of applicants goes up — so we’re seeing a picture, yeah?  Needless to say, plenty of people are getting caught in that ugly spot where they’re trying to legally purchase a gun but are getting stopped at the background check process.

Because the analysts at the FBI are so backlogged, they’re arguing delays will be inevitable.  This, my friends, is just one more reason to apply for a concealed carry permit.  Some states (check with your own, first) even waive the NICS check if you have a valid concealed carry permit.  This makes the purchase process for a handgun or even a rifle much, much easier.  The permit, in of itself though, won’t help if you have legitimate hits against your record that would prohibit you from purchasing a firearm in the first place.  For those folks, unfortunately it’s time to speak with a lawyer because it’s hard to beat the system.

The NICS bureau has about 400 employees working to ensure law abiding gun owners can get their firearms in a timely manner.  The additional 70 analysts the FBI contributed will certainly help process the appeals requests but Morris warns that the sheer volume may prove unwieldy for some time to come.