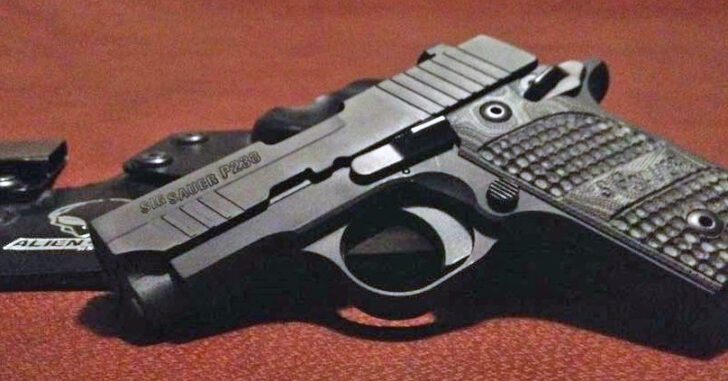 The matter of concealed carry can be one filled with many variables. One particularly troublesome decision one has to make can be as important as the decision to carry itself; and that is, what firearm to decide to carry. I myself decided on a Beretta PX4 Storm Compact, however someone I know (and often mention on more than one occasion in my articles) shares my enthusiasm when it comes to carrying and decided on several different options.

One firearm that my mother decided on as an everyday carry is the Sig Sauer P238. She purchased the Extreme Model, which is no different from the other P238’s, aside from the difference in paint job and grips. I’ve had the privilege to both shoot and handle this firearm extensively since she purchased it last year; and I have to say as far as concealable firearms go, this one is one among the best.

First, I’d like to point out a few specifications on the firearm that I feel noteworthy. The caliber of this particular firearm is .380 ACP and it’s a SAO (Single Action Only.) Meaning the firearm will only fire with the hammer in the rear (cocked) position. Some prefer this mechanic as it does make firing less inclusive. A flip of the slide safety and you’re ready to go. I will mention that I noticed the slide safety was quite stiff when the firearm was first purchased; however after a little range time it did become a little easier to manipulate after building some muscle memory. There is a distinct feel and audible click when the safety is disengaged and reengaged, leaving no question to the state of the firearm. I may also mention that while the slide safety is stiff, there is little risk of it accidentally disengaging while holstered. What I enjoy most about this firearm is its size and ability to be easily and effortlessly concealed. The overall weight of the Sig P238 is just over 15 ounces unloaded without magazine. Overall length of the firearm is 5.5 inches with a height of just less than 5 inches. The total width of the firearm is a simple 1.1 inches, making it an easily concealed firearm. When comparing the loaded weight to my Beretta PX4 Storm, it feels as if the Sig P238 isn’t even on your hip. Honestly you could holster it on your hip in the morning and forget it’s there by mid-day.

However the fact that it’s so light has to do with the limited round capacity of the firearm. Of course when dealing with small and compact firearms such as the Sig P238, limited magazine capacity is to be expected. Speaking of magazines and capacity, when purchasing the firearm new from a vendor, you receive a great hard case to include the usual goodies, one six-count magazine, as well as a simple Sig hard shell OWB holster. I wouldn’t recommend this holster for use aside from the shooting range. It’s not overly stable and doesn’t make for a quick and easy draw.

I will mention one small downfall that the six count magazine doesn’t come with extender to allow a seven count magazine; and the extenders themselves aren’t sold alone to my knowledge. You have to purchase the magazine and extender together, but the cost is affordable depending on where you buy it. Using the extended magazine does offer a more full and comfortable grip. I prefer shooting the Sig P238 with the extender. I do have to add a caveat to the magazine count, as sigsauer.com advertises the P238 Extreme as having a seven-round magazine, it’s possible the version my mother purchased last year with a six-count magazine is outdated.

As far as shooting goes, I find the grip of the firearm pleasant and stable. Again, I mention I prefer shooting this particular firearm with the magazine extender due to the fact I have a large hand and long fingers. I highly recommend anyone purchasing this firearm to include one or two magazines with the extenders since it offers an additional round as well as a more comfortable grip. Recoil is minimal, allowing for easy and quick target acquisition. The sights are SIGLITE Night Sights, which I will note work excellent. Even after being in a dimly lit room or holstered under a shirt for most of the day, you can still notice a discernable glow remaining in the sights. I can say for myself I’ve put quite a few rounds through this firearm and have yet to experience any issues with failure to feed or failure to fire. It fires smoothly, accurately and hasn’t failed to put rounds on target. The frame does lack a rail, which to some might be a deal breaker; but I honestly can’t see putting any sort of rail attachment to this firearm. It would most likely be better suited for some crimson trace laser grips or similar grip attachment if so desired.

All in all, I find the Sig P238 to be an excellent firearm for concealed carry to those who don’t want a lot of weight hanging on their belt or find it difficult to conceal compact or full sized firearms. My mother chose this firearm as a backup to her Glock 23, but tends to favor the Sig P238 more frequently due to its comfort when carrying. I did convince her to invest in a Fobus double magazine carrier so she always has spare magazines on hand within reach. I do take more comfort in knowing she’s going about her daily business carrying a reliable and well-concealed firearm. Previous article: [VIDEO] Must Watch For Any Women Who Carry A Firearm Off Body Next article: Recently Released Criminal Shot Dead By TX Homeowner After He Tried Breaking In