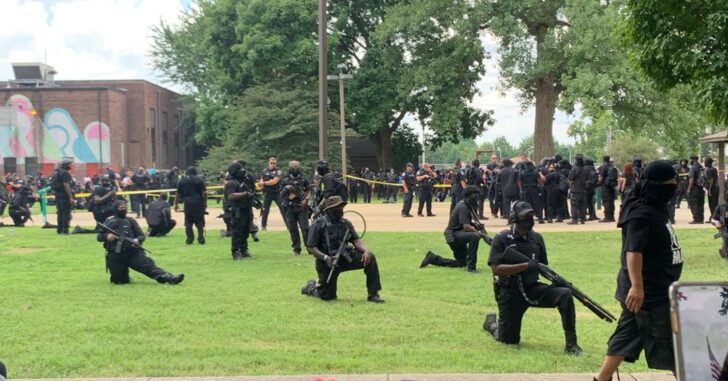 LOUISVILLE, KENTUCKY — An armed protester, reportedly with the militia group “Not F—ing Around Coalition” (NFAC), apparently had a negligent discharge and shot 3 other armed protesters in the same group.

The shooting took place near Baxter Square Park around 1 p.m. and all of the victims were transported to the University of Louisville Hospital with non-life-threatening injuries, the Louisville Metro Police Department (LMPD) told Fox News.

The incident was partially captured on camera as someone live-streamed the event.

One glaring issue when watching the video, outside of hearing the shot: How many times do you see people being flagged with firearms? The handling is not ideal, and they should take a little more care with where they’re pointing their guns.

BREAKING: We just watched two people be taken onto stretchers at Baxter square on 12th and Jefferson. Metro safe has confirmed reports of shootings & that there are multiple victims. We heard the noises when people scattered to get behind cars, & to take a knee @WHAS11 #nightteam pic.twitter.com/h5AsPWlLbi

A member of the NFAC group reportedly spoke with protesters in the area, saying “we had a little accident, it happens.”

If by ‘accident’ he means ‘negligence’, then he’d be correct. Whoever fired the shot is not fit to be handling a firearm in public, and needs some firearms training as soon as possible.

The group is in Louisville to protest the shooting death of Breonna Taylor, who was killed inside her home by police during a no-knock raid back in March.

Previous article: [GRAPHIC WARNING] Portland Man Walks Into Laundromat With Saw, Hacks At Two Women Inside Next article: Self Defense? Armed Protester With AK-47 Shot And Killed By Armed Motorist In Austin [VIDEO]