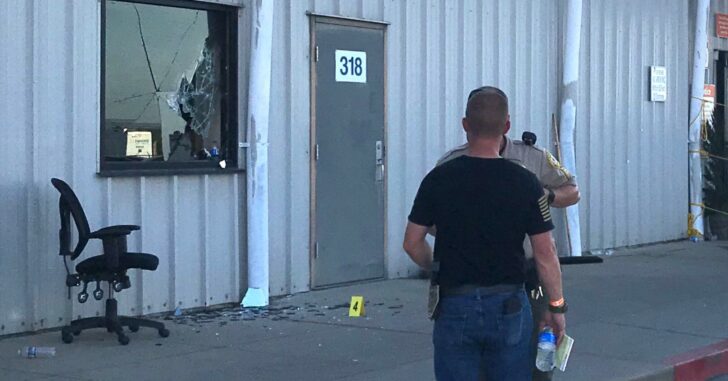 RED BLUFF, CALIFORNIA — Police say a man drove a vehicle into a Walmart distribution center in Northern California and started shooting at people. Two people were killed and four others were injured.

The incident began around 3:30 p.m. local time, and ended around 3:45 p.m. after police took fire from the suspect, ultimately shooting and taking him into custody.

There also was a fire at the site, and the suspect appears to have rammed a vehicle into the building, dispatchers said. There were about 200 workers inside the facility, some of whom locked themselves in a room, employees at the center told the KHSL TV station.

The suspect was described as being in a white vehicle that had wedged into the building, the Sacramento Bee reported. The shooter was in the middle of the parking lot, dispatchers said.

Witnesses reported that the suspect had an AR-15 style rifle and fired multiple shots which lasted a few minutes.

The incident occurred between shifts.

Law enforcement continues to investigate the scene of a shooting at the Walmart Distribution Center in Red Bluff where two have died. pic.twitter.com/3tMY4yPkqf

Dispatchers told local media that the suspect had been shot in the chest around 3:45 p.m. It was confirmed by police that the gunman was shot by responding officers.

Police report that after arriving, a male adult shot at one or more of the officers multiple times. One Red Bluff Police Officer and one Sergeant used their duty rifles and shot at the suspect, ultimately stopping the threat.

The condition of the suspect is not known at this time.

Police continue to work the scene and collect evidence and witness statements.

Previous article: [VIDEO] These Guys Tried Robbing A Gun Store, Only To Be Met With Everyone Armed Inside Next article: [GRAPHIC WARNING] Man Opens Fire On Protesters In Louisville With Armed Citizens Close By