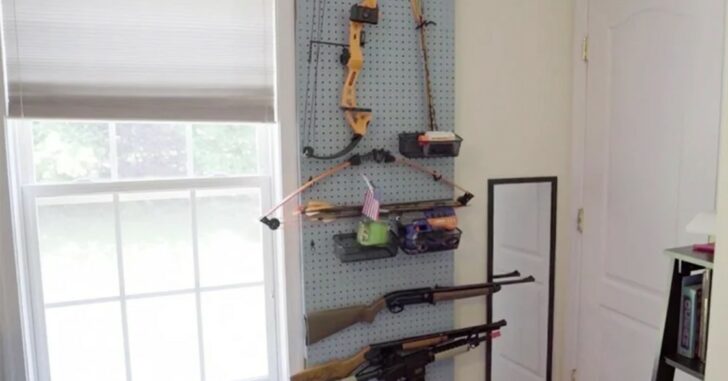 Spending so much more time online these last few months has been a difficult transition for many. Lots of people participating in virtual meetings and classes have been embarrassed by inconvenient activity behind them or noises that are broadcast to others when their mics aren’t on mute.

So you can probably imagine what happened when a Baltimore County, Maryland fifth grader inadvertently revealed his gun collection hanging in his bedroom on a pegboard behind him during an online elementary school class.

Courtney [Lancaster] says she was home with her son who’s been doing virtual learning since schools shut down in March.

“So, I answered the door. The police officer was, he was very nice. He explained to me that he was coming to address an issue with my son’s school,” Courtney told Project Baltimore. “And then explained to me that he was here to search for weapons, in my home. And I consented to let him in. And then I, unfortunately, stood there and watched police officers enter my 11-year-old son’s bedroom.”

That’s where the budding Boy Scout keeps a Red Ryder BB gun and a couple of airsoft rifles prominently displayed along with two compound bows and other gear. Items that at one time was evidence of a healthy, red-blooded American kid.

According to emails Courtney later exchanged with a school administrator, a screenshot was taken during the online class. The principal of Seneca Elementary was notified. Courtney says she was told the school safety officer then called police.

“I felt violated as a parent, for my child, who’s standing there with police officers in his room, just to see the fear on his face,” she said.

It appears that, in a time of forced distance learning, schools’ zero tolerance policies — diktats that make even the slightest reference to firearms of any kind verboten — now extend into their students’ bedrooms.

Since that day, she has written school administrators, the superintendent and the school board, demanding answers. She says the principal initially compared bringing a weapon to a virtual class to bringing a gun to school.

She was also told she could not see the screenshot of her son’s bedroom, because it’s not part of his student record.

“It’s absolutely scary to think about,” Courtney said. “Who are on these calls? Who do we have viewing your children and subsequently taking these screenshots that can be sent anywhere or used for any purpose?”

Previous article: Legally Blind Man Shoots After Someone Kicks In His Front Door, Which Turned Out To Be A 21-Year-Old Drunken Idiot Next article: [UPDATED: VIDEO] Intoxicated Man Is Shot And Killed By Police In Atlanta After He Successfully Gained Access To One Of Their Tasers