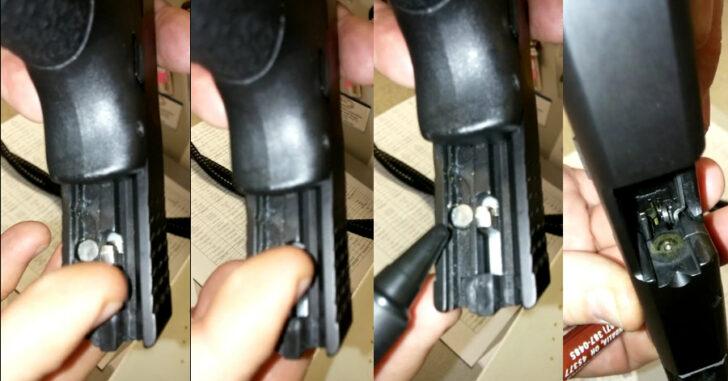 When a person says his gun broke, it could mean anything. There’s a lot of things that can go wrong on a handgun but most of them are fixable. Outside of some catastrophic failure where the pistol breaks in two or blows up (extremely rare), there’s almost always a way to fix a gun.

The first priority should always be safety. If you are at the range when a gun breaks, keep the muzzle pointed down range until you can clear the chamber. Attempt to rack the slide (upper receiver) to the rear and lock it in place. In general, when doing this, make sure no one’s face is near the chamber.

A break is when a component on the gun is physically broken, i.e. cracked, split, splintered, etc. A gun failure is when a gun fails to operate. Gun failure does not equal broken gun.

Gun failures are many times more common than gun breaks.

Here’s a brief run down of most typical failures:

Most of these problems happen at the range. In fact, if you want any of these problems to happen, you most certainly want them to happen in a safe, controlled environment. This is just one of the reasons why we promote regular and routine range time for any concealed carrier. If something can go wrong, eventually it will. When it does, we want to not have it be when a gun owner is attempting to defend his life.

This is one of the reasons why I personally advocate a ‘break in’ period for your everyday carry gun.

The first three issues I listed are some of the most common ones: failure to eject, failure to fire, and failure to feed.

If you believe your gun is broken, the first thing you should always do is attempt to unload the gun. While the gun is pointed down range and in a safe area, lock the upper receiver to the rear. Eject the magazine. Visually and manually inspect for brass or live ammunition in the chamber.

If the gun is clear and unloaded, you are good to begin diagnosing the problem. If it ends up being a broken part, make sure you use the proper tools to replace the part. Otherwise, you’re better off taking it to a certified armorer or gunsmith. Incorrectly installing a replacement part can turn into breaking two or three more because a person doesn’t understand how to properly take apart that gun.

Don’t be embarrassed that you can’t take down your gun to a fine component level. The vast majority of gun owners don’t have the proper equipment or training to do that competently. There’s nothing wrong with taking a class and learning or having a gunsmith show you.

If you go to fire your handgun and you hear a pop but the upper receiver is locked in such a way you can’t eject the round or spent casing from the chamber — stop. This is a bigger issue. This is a safety issue now. While you should attempt to rack the slide to the rear, if it fails to comply, you may need to take the gun to an armorer. This is extremely tricky because there may or may not be a live round in the chamber.

Until you are able to visually inspect the inside of the chamber, treat every gun as if it is loaded. If you need to transport the gun off the range, inform the Range Safety Officer first before attempting to remove the gun from the line. Keep the barrel pointed down range at all times. Follow the Range Safety Officer’s instructions.

Write down exactly what happened prior to the break or failure.

After firing a round from a pistol, the recoil spring assembly should push back against the upper receiver and cause the spent shell casing to eject. If there is no round present, the upper receiver — for most conventional pistols — should lock to the rear.

Funny enough, for some pistols, an owner may not even realize his recoil spring assembly is pointing the wrong way. Just depends on the make and model of the pistol.

The .380 ACP round is only a millimeter shorter than 9mm Parabellum. While it will fire just fine out of a 9mm gun, the casing will likely not eject because it doesn’t apply enough force against the recoil spring assembly to push the slide back enough to accept the next round.

A ‘failure to eject’ doesn’t usually mean a broken gun in of itself. It’s all about why the gun fails to eject.

The major culprits in a failure to feed usually stem from the magazine, magazine catch, the barrel feed lip, and sometimes the recoil spring assembly. A quick way to isolate the first two is by simply swapping a magazine with another one. If the gun continually only fails to feed with one magazine, the magazine may be the issue.

Why Guns Break: A Simple Run-Down Of The Biggest Culprits

Most routine breakages occur because a gun owner did the following:

Don’t worry. Even illustrious gun writers such as myself are not immune. Two years ago, I decided to have my Sig Sauer P250 painted a unique color by a third party custom shop. When I got the gun back, it looked sharp and I couldn’t wait to take it to the range. Due to time constraints, I ended up carrying that Sig Sauer P250 for two full weeks before breaking it in. At the range, I discovered the paint on the upper receiver was just a millimeter out of spec. The first time I fired the gun, the slide locked to the rear instead of feeding in the next round. I swapped magazines and it continued to happen at seemingly random intervals. I had no clue why this was happening. I took it to that third party custom shop. The guy who painted my gun seemed to have a hunch that it was the paint job. They striped down the paint and the gun worked as good as new.

When you modify a highly engineered gun outside of specifications, failures and breakages can occur.

Just Because A Gun Breaks, Don’t Trash It!

From a $200 Hi-Point to a $1400 Kimber, breaks happen. A spring wasn’t made to spec in the factory or maybe a trigger bar assembly just couldn’t handle those hot rounds you were feeding it.

A broken gun is not trash. In most cases, it’s cheaper to fix what’s broken than get a new one. If the gun was “new in box” (NIB) then generally the manufacturer will be very concerned with any failures that happen out in the consumer marketplace.

For mess-ups or avoidable mistakes, a broken gun is a learning opportunity. So long as the gun can be safely unloaded, it can be worked on. Sensitive pieces such as springs and small rods can be replaced quite cheaply.

It’s almost impossible to know whether a break occurred solely because a part wasn’t up to snuff when it shipped. If you have the opportunity to send the gun back to the manufacturer, do it. It could mean a great improvement to the gun that ends up saving the life of another gun owner later on down the line.

Previous article: Teen Shoots Himself When Reaching For Gun In Waistband: Your Idiot Of The Day Next article: Could Michigan Go Next? Permitless Carry Bills Hit The Michigan House