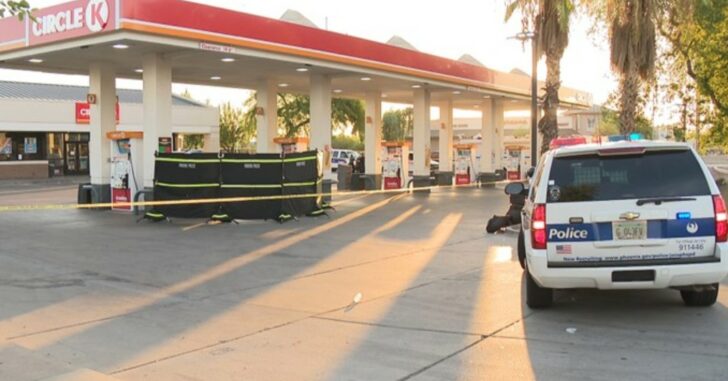 PHOENIX, ARIZONA — A 19-year-old was sitting inside his vehicle at a gas station when a woman approached him. That woman was intended to be a distraction while her partner walked up from another direction.

He approached the vehicle with a knife in his hand, and that’s when the 19-year-old intended victim fought back.

Investigators say a 19-year-old man was sitting in his car at a gas pump with the driver’s side door open when a woman reportedly came up to him to cause a distraction.

He then noticed the suspect coming toward him from the back of the car holding a knife.

According to the police, the suspect demanded the 19-year-old’s car.
At that point, the victim got out his handgun and fired shots at the carjacker. He was pronounced dead at the scene.

The woman was found and taken into custody a short time later, and is now facing murder charges for the death of her fellow criminal who didn’t make it.

The armed teen, as soon as the incident ended, ran into the gas station to call police and then waited for them to arrive.

In Arizona, open carry is permitted for anyone over the age of 18 who can legally possess a firearm, while concealed carry requires the person to be 21 or older.

Previous article: In the Hunt - 10 - Longhorn Deer Next article: *GRAPHIC* This Video Is All About Situational Awareness, So You Don't End Up Under A Truck Like This Guy