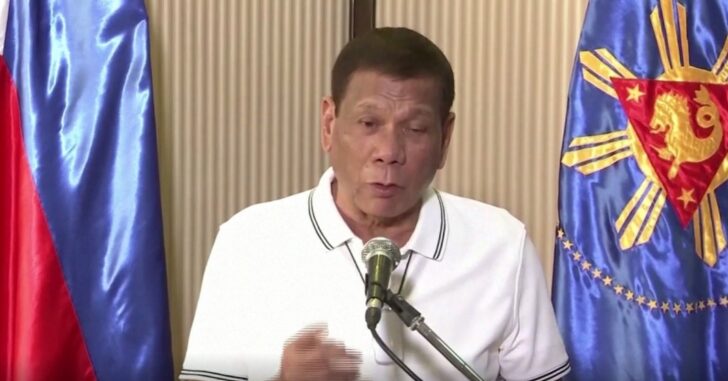 Editorial Note: After posting this story to our Facebook page, some readers were critical of the way this story was reported. After reviewing the article and reading multiple sources on the subject, our initial reaction (seen below) seems to hold true; that the Philippine President was frustrated during his statement and said things in a confusing manner. The addition of the word ‘or’ in the statement below is what we interpreted as being this or that (any trouble vs. lives being in danger);

“…if there is any trouble, or occasions where there’s violence and your lives are in danger, shoot them dead,…”

The largest takeaway from this story, however, is the comments made about losing against the Government;

The article title, as a result, has been updated to highlight this.

Protesting a lack of supplies, citizens of Manila in the Philippines clashed with police when they argued they had not received food supplies in two weeks. 20 people were arrested after police say they refused to return home.

That night, Philippine President Rodrigo Duterte made an announcement on TV that would chill any citizen in any country.

“I will not hesitate. My orders are to the police and military, as well as village officials, if there is any trouble, or occasions where there’s violence and your lives are in danger, shoot them dead,” he said. “Do not intimidate the government. Do not challenge the government. You will lose.”

One can understand tempers getting heated as frustration runs higher, but making such a statement to your citizens is something to be examined. And taken seriously.

“Probably the president just overemphasized on implementing the law in this time of crisis,” Philippine National Police Chief Archie Gamboa said, adding that officers understood that they were not actually being instructed to kill troublemakers.

That may be, but maybe even more troubling were his remarks about not challenging the government.

That’s a powerful statement all in itself, and makes me proud to live in a Country where our freedoms allow us to challenge the Government if we deem it necessary. If aid doesn’t come in a time of need, we can speak out against that and protest without our Government making statements similar to the ones above.

And don’t forget about the Second Amendment.

Imagine if our Government made such a statement. What do you think the reaction would be?

Previous article: Some Criminals Don't Care About Compliance, Like This Cold-Blooded Killer During A Robbery Next article: Increase In Home Invasions Likely Linked To Coronavirus Pandemic. Are You Prepared?