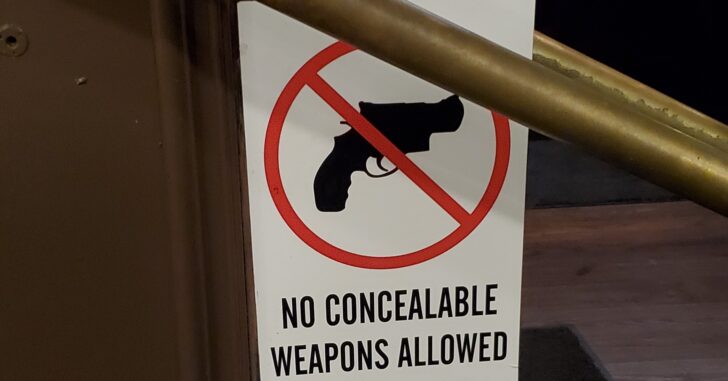 This while week, we were invited to South Carolina by Palmetto State Armory to check out their facilities, meet the people behind the company, and learn about their manufacturing processes, as well as new products.

We’ll have a few articles coming up in regards to the trip, because it was a blast and we learned a lot.

But for now, let’s talk about SC and CC.

Having a Florida resident concealed carry permit, I was able to carry in the state. I just made it though, as they do not recognize FL non-resident permits. For those that don’t know my story, I am originally from New York and had a FL nonresident permit for years, before moving here a few years ago.

First issue, maybe because I’m spoiled: Posted ‘No Guns’ signs at businesses hold the weight of the law.

Florida doesn’t have this. If a business has a sign, you can still legally carry concealed in that business. Even New York allows this. I was surprised to see that SC takes this seriously, and can arrest concealed carriers if they are found to be carrying in one of these locations with a posted sign.

*Second issue: Zero tolerance for any combination of carrying and drinking alcohol.

*Here’s the thing. I’m not a big drinker. I also don’t condone drinking while carrying a firearm.

However, the zero tolerance law would make a sip illegal, and that’s challenging for me. Trying to always abide by the law, it takes away from some of the simple pleasures, such as trying someone’s drink. I know I’m being picky, but I can’t help but feel the tight restriction.

For someone who drinks to the point of it being a problem, while carrying a firearm, is probably going to do that same thing regardless of what the law says.

But in the states that I’m used to, FL and NY, I never really heard of it being a problem.

South Carolina just isn’t as relaxed in the gun world as I thought they were.

Previous article: Man Forced To Shoot Brother In Self Defense, Who Dies At The Scene Next article: Man In Casino Brutally Attacked And Robbed, But He Has A Gun And Wins The Jackpot