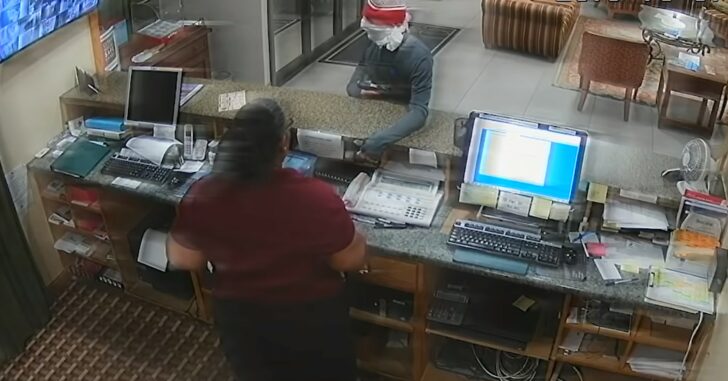 If the bad guys were smart, they’d have normal jobs like the rest of us. That’s not the case, however, and we have seen our share of dumb criminals when covering these self-defense stories.

But for us, the intended victims, the dumber the criminal the better.

This guy takes at least part of the cake, and we have to give a ton of credit to the clerk for her actions. She’s able to convince the bad guy to go back around the counter to where the customers would be. And he does.

Now that he’s on the other side, the clerk is able to breathe a little easier. I mean, as easily as you can breathe with a gun pointed at you.

Still, she seems to remain calm, and more importantly, annoyed.

When he gets impatient, he hops up on the counter. The clerk’s response is to push him off the counter. That’s definitely the attitude of a person who simply doesn’t want any of what’s going on. Still, we need to remember that she had a firearm pointed at her, so we’ll assume that the bad guy was giving her a vibe of ‘he is not going to shoot me’.

The clerk gives him the money, literally by throwing it up on the counter. She just doesn’t care, and has had her fill of this unfortunate incident.

Here’s where it gets good. Seeing the green, the bad guy starts rounding it up. What’s the fastest way to do that? Well, with both hands of course! He places the gun on the counter, and we can see the clerk taking notice of this. She hesitates, but eventually grabs it and points it at the bad guy.

He moves quickly, which would lead us to believe that it is, in fact, loaded. She tries to pull the trigger. Nothing happens.

He comes back into the lobby and demands his gun back, but by then it’s too late. The clerk realizes that the safety is on, and she disengages it and pulls the trigger again. This time, it goes boom. And he’s outta there.

Previous article: Attempted Robbery, Emphasis On Attempted, Because An Armed Employee Fought Back Next article: Bronx Convenient Store Clerk Surprises Armed Robber With Gun Of His Own