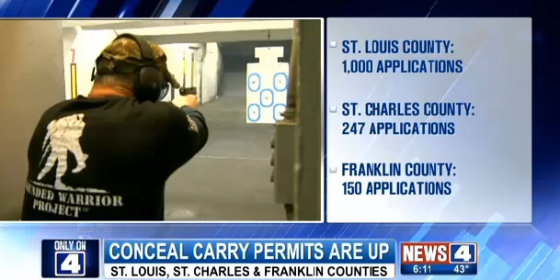 “Several sheriff’s departments in the area said in the last six-months they have been slammed with new applications for concealed carry permits,” St. Louis’ kmov.com reports. And why is that, you ask? Actually, you don’t. You know as well as I do that the “protests” in Ferguson sent concerned citizens flocking to the firearms permitting process to tool up. Here are the actual numbers . . .

The Franklin County Sheriff’s Department said the unrest in Ferguson contributed to the increase in applications. In 2014, the county had a total of 907 applications. In the first three months of 2015, more than 500 people have already applied.

Is the suggestion made above that the Ferguson riots account for the surge racist? Of course not. But KMOV managed to find someone in law enforcement who refused to connect dots as big as puppy dog eyes (though a lot less friendly):

When asked about the increase in applications, St. Louis County Police Det. Michael Kaufman said, “I wouldn’t be able to give you an answer from each resident, everybody’s opinion is different. I can say from any event that happens nationwide or locally, sometimes there’s an increase.”

When it comes to anti-gun mainstream media, any police prevaricator will do. Anyway, one wonders what effect the “protests” in Baltimore will do for the number of concealed carry permits. Or not. But given Maryland’s “may issue” status, chances are the apps will be for nought. Shame.

Previous article: Don't Shoot At A Fleeing Suspect, Even If They Did Just Steal Your Chainsaw: DA Deciding On Charges Next article: [BREAKING] Oregon House Passes Concealed Carry Reciprocity Bill By A 57-1 Vote