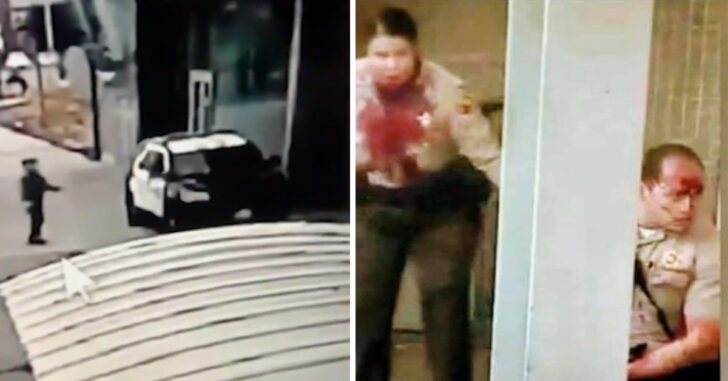 A few days ago, an unknown man walked up to a Los Angeles County Sheriff Deputy’s vehicle and opened fire. Both officers who were sitting inside were shot, one in the head and the other in the face.

This is reality folks. Don’t turn away from this picture!!! Look at it!

This women showed her will to survive and proved she had a winning mindset! She was shot twice in the face, multiple times in her arms and she stood tall and refused to give up…she placed a tourniquet on her partner, coordinate emergency response and got herself and her partner off the X, all while providing cover to her partner, who was also shot multiple times in the head and arms.

And all the while “protesters” were blocking the hospital entrances and cheering for the death of these officers.

Where are YOU standing America? Time to draw the line.

These are the men and women protecting your lives day in and day out.

Please pray for ALL of our LE.

After the attack, a group of protesters went to the hospital where the officers were taken and praised their injuries, taunting other officers who were there to support their downed brother and sister.

There is absolutely an attack on police officers all around, and it’s not fair to the 99% of officers who do a great job and are good cops.

The female officer in this case was shown on surveillance video, applying a tourniquet on her partner as she stood bleeding from her face after being shot in the jaw. I can only hope that I possess this strength if I’m ever in a similar situation.

Both officers are now in stable condition, but have a long and painful road to recovery.

The suspect is still on the loose.

Previous article: Riots And Looting In Lancaster, PA After Police Shoot Man Running After Them With Large Knife Next article: Concealed Carrier Dies After Shooting Back At Electronically Monitored Felon Who Just Shot 5 People