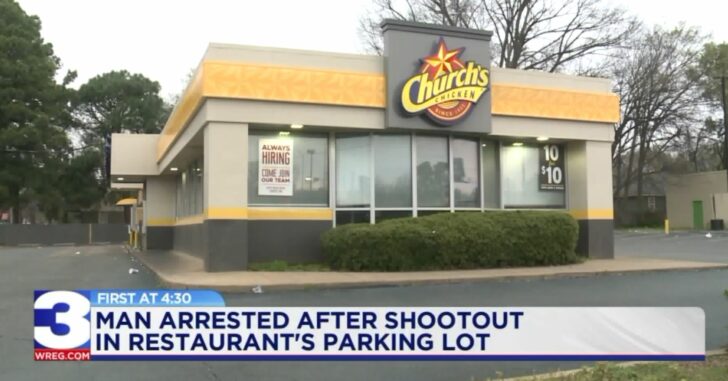 MEMPHIS, TENNESSEE — Police have not released details on what caused the shootout at a local chicken restaurant. However, customers say that chaos was taking place inside before the shooting started. Employees were accusing each other of stealing, and food orders were going out wrong. Then the shooting started.

Around a dozen bullets both inside and outside the Church’s Chicken on Summer Avenue after police say a man got into a shootout with a female employee.

Police said the suspect Ledarrius Stokes had been at the restaurant earlier with his girlfriend who works there. She called the store and told them he was coming back to shoot up the place and then came back and locked all of the employees inside.

Stokes allegedly fired numerous shots through the drive thru window at one particular employee, who fired back. She then went out and started shooting in the parking lot.

There were at least 10 people inside the restaurant at the time along with eight cars in the drive thru.

Inside a local Church’s Fried Chicken, bad things were brewing. Employees were arguing with each other, making accusations. Customers were not getting treated well. Orders were not being made properly. All of these things eventually boiled over.

One customer, Ledarius Stokes, was inside the restaurant with his girlfriend who works there. Something set him off and he left. His girlfriend warned the employees that Stokes was coming back with a gun. The employees locked the doors to keep everyone safe.

The female employee went outside and began shooting at Stokes from the parking lot. Eventually the shooting stopped. Thankfully no one was injured.

Absolutely everything about this story is bad. The restaurant was out of control, with no responsible manager in sight. Customers were unhappy. This toxic environment ultimately led to some irresponsible people doing irresponsible things.

Stokes is obviously the aggressor in this story. There is no indication his life was in danger or threatened. Even if it was, once he was out of harms way he should not have returned. However, that wasn’t even the case. Stokes was just angry about something. His anger led him to retrieve a firearm for the purpose of returning to the restaurant and shooting someone.

When he did, another irresponsible gun owner indulged him with a shootout. Firing outside through the drive-thru window, the armed employee engaged recklessly. The employee followed up this act by running out into the parking lot to continue the shootout outside the safety of the locked restaurant.

Nothing. Almost nothing about this event did something positive happen worth mentioning. The sole exception is that the girlfriend had enough sense to warn the restaurant, allowing enough time for the doors to be locked. Had this not happened, Stoked would have had easy access back into the restaurant. Once inside, he would have had a target rich environment that could have left a number of people dead.

Thankfully, Stokes’ girlfriend is a lot smarter and caring then he is. Otherwise things could have gotten ugly between these two irresponsible gun owners.

Previous article: NRA Annual Meeting Cancelled Due To Coronavirus Concerns Next article: Americans Are Buying Guns And Ammo As Part Of Their Coronavirus Preparations