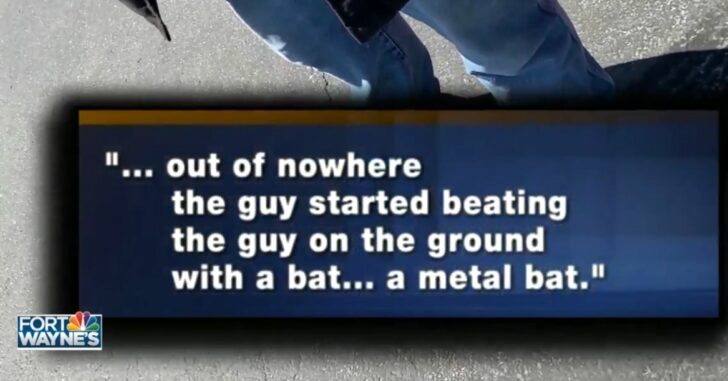 FORT WAYNE, INDIANA — It’s not terribly surprising this happened at a Walmart. Lots of crazy things seem to happen at Walmart. It is like the Florida Man of shopping. Thankfully, however, there was a good guy there who helped end the madness. If he did not, this likely would have ended in murder.

Police say a bystander armed with a gun kept a brutal baseball bat beating on Saturday from being even worse.

Fort Wayne police say the bystander pulled out a gun when they saw a masked man beating the victim in the Glen Apple Walmart parking lot just before 10:30 a.m.

That’s when police say the man got back into his burgundy Chevy Impala and drove away.

From what we know, Levi Arnold was in the Walmart parking lot when he rammed DeMarcus Walker with his vehicle. After hitting Walker with his car, Arnold got out of his car with a metal baseball bat. Arnold then proceeded to viciously bludgeon Walker with the bat.

Walker was near death when a bystander who witnessed this murder attempt in progress finally stepped in. We don’t have a name on this good Samaritan, but we do know he stopped the attacked. Drawing a firearm and pointing it at Arnold was enough to get him to stop the beatings. Arnold got into his car and sped off.

Arnold managed to evade two police car chases before he was finally caught and arrested. He is being charged with attempted murder. Initial investigations suggest Arnold just “snapped” and Walker happened to be the closest target when it happened.

Alfred, from the Christopher Nolan Batman movies, provides a telling lesson for his master Bruce; “Some men just want to watch the world burn.” Although Arnold is no super villain, this incident shows that people are unpredictable, and sometimes crave violence for simply the sake of violence.

This is a great reason to carry. You never know when you may come across an Arnold in your life. Someone who simply wants to deliver pain and harm to others for no apparent reason. We wish Walker was carrying that day, he may have had a better chance to defend himself.

Our unnamed good guy with a gun is a hero in this story. Although they don’t mention his name, this story would have been written much differently without him. Other articles written about this same incident fail to mention an armed bystander at all. Yet the fact remains a good guy with a gun was there to stop a murder.

The armed bystander risked his own life to help another man that was helplessly being beaten to death. He had no idea what Arnold was capable of, or if Arnold was also carrying a firearm. Although it is important to remember a concealed carry license is not a badge and you are not obligated to help anyone; yet being a decent human being and helping your fellow man doesn’t require a license, it only requires you to be human.