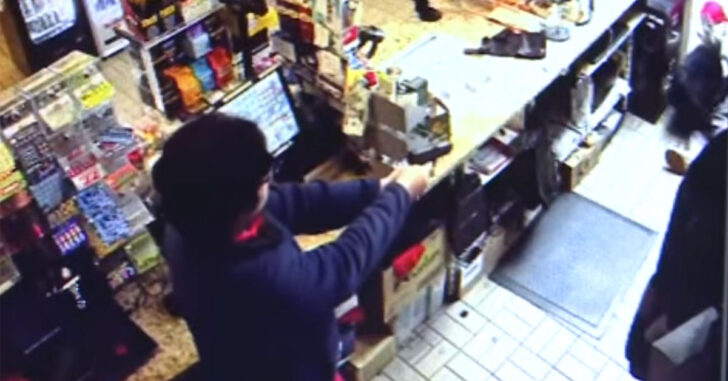 DULUTH, GEORGIA — A man armed with a knife was sprinting towards a store, barely makes it into the front door as he seems to trip during the excitement, and runs right for the cashier.

The cashier was paying attention and just before the knife-wielding moron got to him, he grabbed a gun stashed away behind the counter and fires a single shot.

The department said that around 3:35 a.m., 21-year-old Christian Saint Amour rushed with a knife into the gas station mart at a Shell on Peachtree Industrial Boulevard.

“Surveillance video showed a black male run into the Shell, with a red shirt covering his face armed with a knife,” a release said.

Police described how the “male continued to run in the store towards the cashier area still armed with the knife,” before he was stopped in his tracks by the store’s armed cashier.

“At this time, the cashier shot the armed male one time in the left leg,” the release said.

After the cashier fired, he held the robber at gunpoint until police arrived. During their wait for police, it would seem that the robber was talking to the armed cashier and was likely pleading for his life.

When police arrived, they quickly figured out what had gone down, and the injured party was taken to the hospital for treatment. He is being charged with multiple crimes, and will hopefully spend a good amount of time behind bars.

This armed cashier, who has not been identified, worked with precision and without hesitation. Aside from not having the firearm on his person, the execution of this self-defense shooting was as near as perfect as one would hope for.

It’s a perfect example of shooting to stop the threat, which is exactly what this cashier did.

Watch the surveillance video below, which gives us a clear picture from multiple angles as to what went down.

Previous article: Florida Republicans Want CCW Ban Exemption For Themselves, Introduce Bills That Would Do Just That Next article: Man Kicks Down Door Of Ex-Girlfriend, Is Shot And Killed By Residents Inside