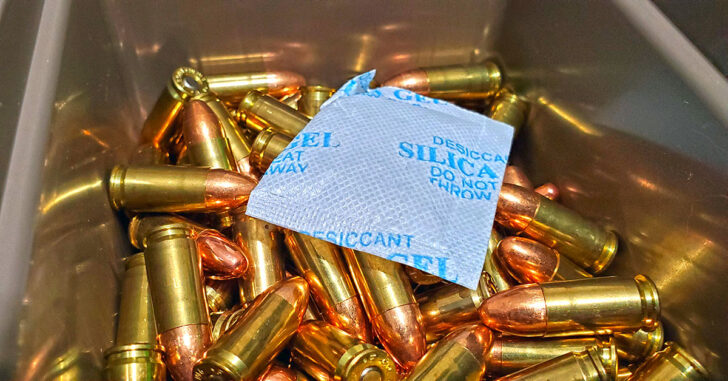 One thing we all know is that water and moisture don’t play well with ammunition. While modern ammo is pretty water tight, we still want to make sure that any ammo we have remains as dry as it possibly can.

During our coronavirus quarantine, I made some ammo storage changes after I got a new safe from Liberty Safe. With the safe, I picked up a dehumidifier rod to heat the air and remove any moisture. I also picked up some new ammo cans, and added one extra thing to them; Silica Gel packs.

The reason for the packs: They absorb moisture and humidity, and throwing a few into each ammo can isn’t going to hurt a thing. If the cans do happen to have a bad seal or moisture gets in there somehow, the packs should be enough to soak that moisture up.

The packs aren’t hard to find, and they’re cheap. For example, I picked up a 50-pack of Silica gel on Amazon for under $8 shipped. There are plenty of options, so if those don’t look like what you want for whatever reason, do a search and you’ll find many options.

Many ammo cans will have a seal that should prevent moisture from entering, but at the cheap price that these gel packs go for, it’s worth the purchase to me. Even if I have confidence that the cans won’t let moisture in, it’s not going to hurt anything by having the gel packs inside.

Ammunition, just like our firearms, are investments that we’ve made and cost real money. Doing a little extra to ensure that our investments are sound is always a good idea, even if some see it as overkill.