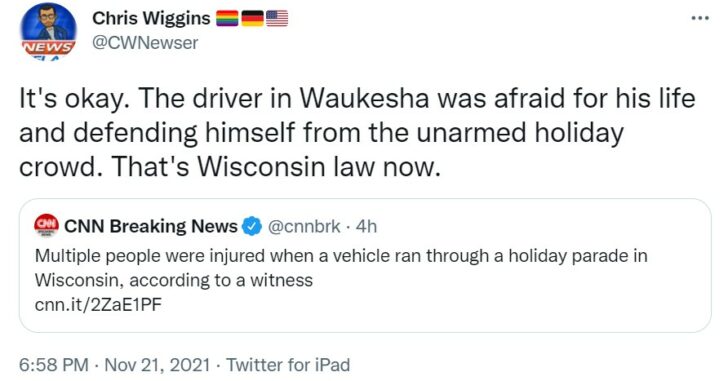 In what might be soon classified as an act of domestic terrorism, the terrible incident in Wisconsin where an SUV plowed into a parade, killing multiple people and injuring over 2 dozen, a reporter by the name of Chris Wiggins took to Twitter and attempted to vent his frustration at the outcome of the Kyle Rittenhouse trial.

According to his Twitter bio, he’s a CBS 6 alum, but he failed to also mention that he’s an inappropriate commenter and lacks a heart. He also likes sushi and cilantro, if you’re interested in that sort of thing.

It's okay. The driver in Waukesha was afraid for his life and defending himself from the unarmed holiday crowd. That's Wisconsin law now. https://t.co/j5bhBCsc0W

The thought process behind such a public statement is something that I won’t understand, ever. These two incidents are absolutely and 100% different, in fact on opposite ends of the spectrum. In one case, you have rioters doing violent things, and in the other you have families gathered for a holiday event.

Where does this guy live?

He’s loving the attention, however, continuing to tweet about ‘triggering’ the ‘right wingers’.

In reality, he’s ‘triggering’ everyone, because anyone (besides him) can see that the comparisons are completely uncalled for, in extremely poor taste, and have nothing to do with each other.