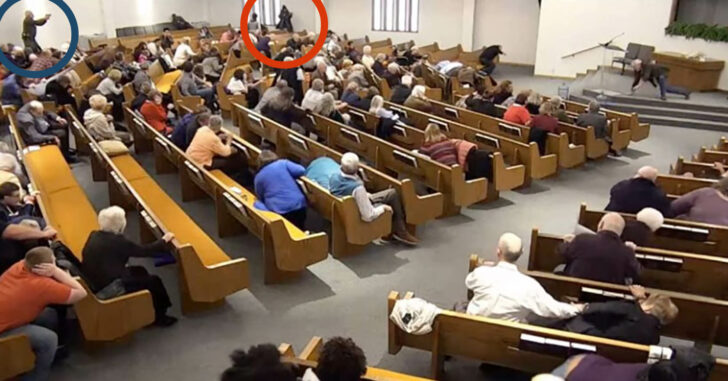 Video is circulating the internet that shows the moments just before the shooting at West Freeway Church of Christ in Texas took place, as well as the moments after.

Moments before the suspect became active, we can see the security guard standing next to the wall, and what appears to be the same suspect sitting down among the congregation.

The second image available is taken directly after the suspect started firing, and we can clearly see the armed security guard with his firearm up and on target.

The full video shows the suspect go up to a person standing along the wall and appears to speak with him prior to opening fire. Three shots are then heard; two from the suspect and one from the armed security.

We have decided to share the video, because there is a lot to discuss and learn from it in the coming days.

WARNING: The video below is graphic. Viewer discretion is advised.

The armed security member, who is said to also be an ex-FBI agent, took a single shot that stopped this potential mass shooting.

During the video, we can see multiple people drawing their firearms and pointing them at the suspect.

We will have a breakdown of this video in the coming days.