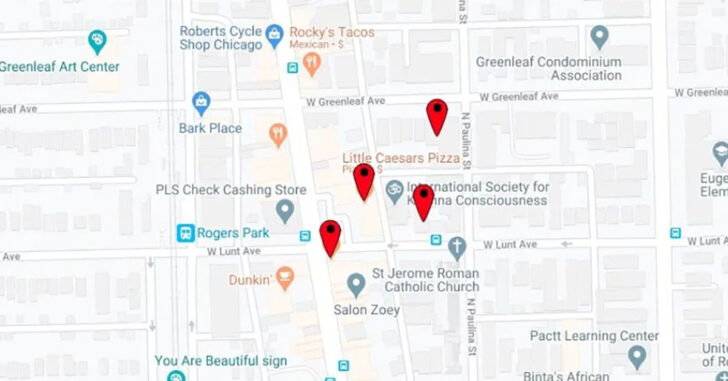 An armed robber wasted no time trying to knock off multiple locations and people during a window of 15 minutes one evening this week. Some of his attempts were unsuccessful, but not all. Jumping from place to place and person to person, his spree ended quickly when he encountered a man on the street that he chose as his next target.

It all started around 9 p.m. when the offender displayed a gun in his waistband as he tried to rob Little Caesars, 7001 North Clark, the reports show. The man left empty-handed and immediately robbed Taqueria Hernandez across the street at 6983 North Clark.

At 9:04 p.m., the offender flashed a gun and carjacked a driver on the 1700 block of North Lunt, the reports said. He got away with the man’s silver 2008 Saturn sedan, which bears a license plate that begins with BK911.

But the gunman made a tactical error around 9:15 p.m. when he walked up to a concealed carry holder on the 7000 block of North Paulina, pulled out a gun, and said, “give me all you got.”

That person was a concealed carrier, and as soon as he understood the interaction to be an armed robbery, he drew his firearm and fired at least 5 shots in the armed robber’s direction.

The bad guy was not caught, and police have no record of anyone seeking medical attention for gunshot wounds following the shooting. This would lead us to believe that the armed robber wasn’t struck by the armed citizen.

Police are still looking for the suspect, described as; “Police said the offender is a white man between 18- and 30-years-old who stands 5’9” to 6’2” tall, and weighs 160 to 200 pounds. He wore a black hoodie and a mask over the lower half of his face.”

The armed citizen reacted quickly and was able to send the bad guy running in the opposite direction.

It would seem that marksmanship wasn’t as good as he probably had hoped, but one never knows how they will react in a situation like this. That’s why training is so important, especially simulating training under stress.

Praises to the armed citizen for deciding to carry a firearm, and we’re glad to hear that he wasn’t hurt during the incident.

Previous article: Woman Opens Fire On Shoppers In Tulsa, Is Shot And Killed By Concealed Carrier Next article: BREAKING: DHS States That Firearm Manufacturers And Retailers Are Essential Businesses