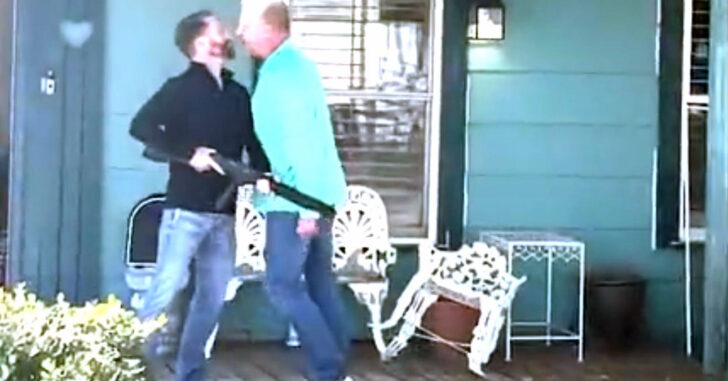 LUBBOCK, TEXAS — A court-ordered handoff of a child, based on a custody agreement, couldn’t have gone any worse than it did. When the child wasn’t available at the agreed upon time, the father refused to leave until he had his son.

The man in the green shirt is the child’s father, Chad Read. His ex-wife, Christina Read, is also visible in the video. The other man in the video is Christina’s boyfriend, William Carruth.

During the argument, Carruth tries to intervene and order Read off the property. Read wasn’t backing down easily, and threatened to take all parties involved to court.

Eventually, Carruth walks inside the house and comes back out a few moments later with a rifle. He immediately confronts Read and tells him to leave, which enrages Read and the two are chest to chest in a matter of seconds. Read swears at Carruth, telling him to use it (the gun) or else he’d take it.

Carruth then fires a shot into the ground near Read’s feet. Read grabs Carruth and the gun, swinging him around and off the front porch, at which point Carruth fires two shots at Read, killing him.

Warning: This video is graphic and uncensored.

This is the Nov. 5 shooting of Chad Read by Kyle Carruth, estranged husband of state judge Ann-Marie Carruth.

No charges have been filed.

Another video, taken on a cell phone from inside the house, was also released and can be viewed below.

The husband of a judge in Lubbock, Kyle Carruth, killed a man named Chad Read in front of Chad’s 11 year old son. pic.twitter.com/5DCmdyJ9oM

For the record, so far, no charges have been filed.

I’m no attorney, but this doesn’t seem to qualify for self-defense in my world. I can understand the desire to have someone leave your property but under the circumstances, coming out of the home, armed and up close, isn’t the correct way to handle this. It would seem that more than anything, egos got in the way and ended in tragedy.

If you’re in this situation, call the damn police and have them come over to assist. Read wasn’t being violent during the encounter, so Carruth doesn’t seem to have a leg to stand on when claiming self-defense.

I was also pretty astonished at Carruth’s reaction after the shooting, seeming very calm and casually explaining his actions while standing next to the man he just shot and killed.

If Carruth doesn’t end up facing charges for this, I’d be extremely surprised.

Plot twist: Read’s son was apparently inside the home the entire time.