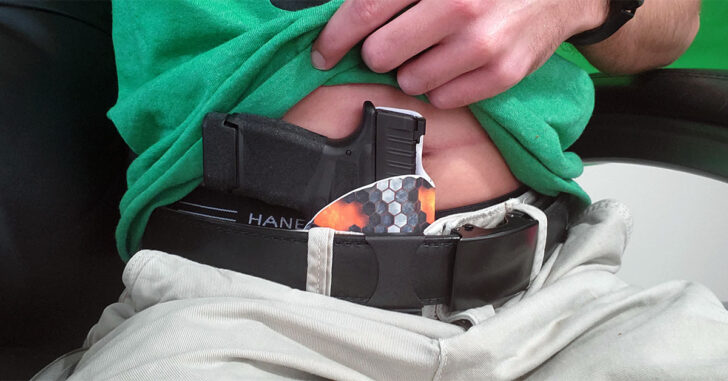 The picture above is one that I just took. Yes, I’m carrying appendix, but that’s a whole other topic.

I’ve never been a fan of having my gun sit somewhere close by while I’m working in the office. I’d rather have it on me. There really isn’t anything more convenient.

This ‘quarantine’ is starting to relax a lot of people. By relax, I mean they’re working from home (or lost their jobs) and the free time is tremendous. With that change can come laziness, and not in a good way.

Even if I’m going to have a lazy day, I still like to get dressed as if I were heading out. The reason is twofold: First, I’m less productive if I’m wearing gym shorts at home and tend to get less done. Second, I like to have things on me that I’ll need throughout the day. Keys, knife, credit card, gun. Nothing annoys me more than going to do something, like unlocking the car to grab something quick, and find that I don’t have the key with me. Same thing goes for needing a knife. If it’s not with me, I’m annoyed.

So, I dress as if I were going out of the house. My wife always gives me a hard time about it. “Relax, you’re at home” is what she usually says.

Of course there are days where I don’t do this, but it’s a “be a bum on the couch” kind of day. I’m parked.

Now that we’re not really going anywhere, I still get ready as if I am going somewhere. Or just prepared. Either way, my gun comes with me as I travel from room to room.

Sure you can stage guns, but that’s more useful for something that could happen while you’re sleeping. *Bump in the night* and you grab your handgun close by, and use that handgun to get to your long gun. But if you’re inside your home during the day, what’s better than having your gun on your hip?

It’s easier than manually moving a gun from place to place. That’s just silly. And it’s much easier to get to if someone were to break in. Many call this paranoia, but not me. I’ve covered enough stories to know that home invasions can happen in an instant, and anywhere. Why not be as prepared as you can be, by doing this you’re normally doing everyday as a concealed carrier?

What’s your routine? With the changes, have you become more relaxed, or have you stuck with carrying your gun while stuck at home?