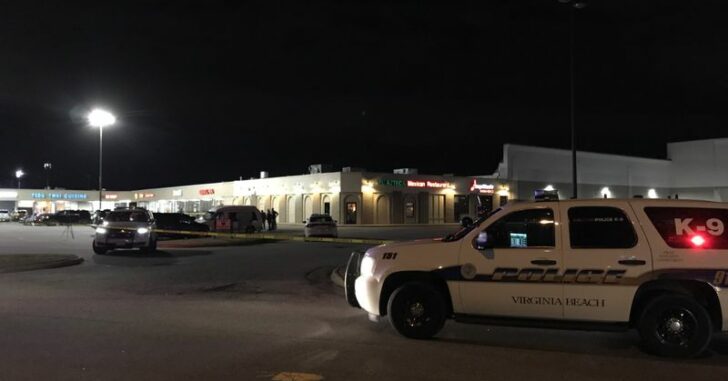 VIRGINIA BEACH, VIRGINIA — The unidentified shooter was out enjoying dinner with his family. As they exited the restaurant a man confronted the family and became aggressive with them. After asking the man to leave them alone numerous times with no result, dad finally took action.

A Chesapeake man was shot and killed by a member of a family he approached “aggressively” outside a Mexican restaurant in Virginia Beach Friday night, police said. The family had told the man to leave them alone, said police spokeswoman Tonya Pierce.

Brian Orlando Hicks, 37, died on scene at the parking lot outside El Azteca, a longtime restaurant in Pembroke East Shoppes.

The man who shot and killed Hicks waited on scene for police to arrive and was released later after being questioned by detectives, police said, describing the incident as a confrontation between the two men. Pierce said Hicks was “verbally aggressive” and continued to follow the family despite being told to stop.

Hicks, the man harassing the family, was not a stranger to that restaurant parking lot. Staff of the restaurant said that they have had problem with Hicks in the past. Apparently he had been known to harass staff, and panhandle customers in the parking lot. He would often get angry when people refused to give him money.

On this particular night, Hicks brand of panhandling would end up getting him killed. He spotted his next target and went after family for some money. When dad rebuked him, Hicks became angry an aggressive.

Despite being asked to leave the family alone, Hicks continue to pursue. His aggressiveness towards the family intensified. Dad, feeling as though his family was now in danger acted in self defense. Dad drew his weapon and shot Hicks, killing him in the parking lot.

The bad here really falls squarely on the restaurant. They have a responsibility to provide a safe environment for their patrons. If they were aware of Hicks bullying staff and harassing customers they should have done something about it.

Instead of working with Police to remove Hicks from the area, they continued to allow his actions to continue. This decision ultimately led to Hicks death, and a traumatic experience for a family.

Dad was prepared and defended his family when he needed to. Dad repeatedly asking Hicks to back off. He did his best to avoid a confrontation with Hicks. However, when Hicks continued to press, seemingly getting angrier and more aggressive, dad defended his family.

The staff also mentioned that the family had been coming to that restaurant for many years. Dad was smart enough, despite being in a familiar and safe place, to carry his firearm with him. It potentially saved his families life.

After the shooting, dad called police and waited for them to arrive. This is so important to do for anyone involved in a defensive shooting. When police arrived he fully cooperated. After interviewing dad, the police released him without pressing charges. The shooting was determined to be a defensive action.

Previous article: [VIDEO] First Documented Self-defensive Use With A Springfield Hellcat Next article: Security Guard Surrounded By Three Suspects Shoots, Kills Suspect Who Pulled A Firearm On Him