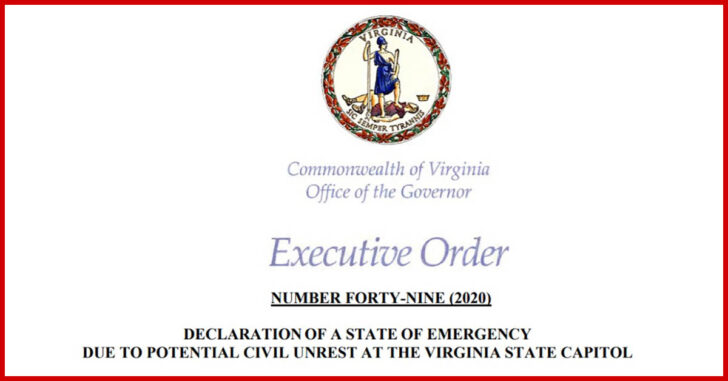 On Wednesday Virginia Governor Ralph Northam issued an executive order declaring a temporary state of emergency, effective January 17-21, in order to ban firearms at a pro-gun rally that is planned at the state capitol complex on Monday January 20th. During a press conference Wednesday Northam attempted to justify his actions by saying, “we have received credible intelligence from our law enforcement agencies that there are groups with malicious plans for the rally that is planned for Monday.” Despite his previous affinity to do so, Northam was thankfully not wearing blackface or dressed as the KKK during the press conference.

Governor Northam may have failed to take into account his own state laws, however, which prohibit the governor from using an emergency declaration to ban firearms. Enacted in 2012, Va. Code Ann. § 44-146.15(3) specifically states that “the Governor, any political subdivision, or any other governmental authority” may not:

“in any way limit or prohibit the rights of the people to keep and bear arms as guaranteed by Article I, Section 13 of the Constitution of Virginia or the Second Amendment of the Constitution of the United States, including the otherwise lawful possession, carrying, transportation, sale, or transfer of firearms…”

One of the authors of the law, Delegate Mike Watson was quick to point this out on Twitter:

Perhaps he should take a look at VA Code first: https://t.co/SdJPH1j3L2
Del. Tony Wilt & I patroned this bill in 2012 so that no one could declare an emergency in an effort to prohibit citizens from exercising their 2nd Amendment rights. Signed into law 3/1/2012 https://t.co/lR9aSE30DJ

“except to the extent necessary to ensure public safety in any place or facility designated or used by the Governor, any political subdivision of the Commonwealth, or any other governmental entity as an emergency shelter or for the purpose of sheltering persons”

Northam’s office is now claiming that the entire 14-acre capitol complex is an “emergency shelter” and thereby off limits to firearms. It is an unprecedented move, one that almost certainly wouldn’t stand up in court, if only there were time to challenge it before Monday. After all, if a governor can ban firearms by simply calling a large land area an emergency shelter, then what would prevent him from declaring the entire state of Virginia an emergency shelter?

The event on Monday, hosted by the Virginia Citizens Defense League, is expected to draw thousands of armed demonstrators. The discomfort Northam feels at the thought of thousands of armed citizens marching towards the Capitol is precisely what the founders intended. In his initial draft of the Virginia constitution, Thomas Jefferson wrote, “no free man shall ever be debarred the use of arms.” In an 1824 letter to English reformer John Cartwright, Jefferson stated is was the “right and duty” of each American citizen “to be at all times armed.”

Governor Northam is the embodied antithesis of Jefferson. Where Jefferson famously preferred dangerous freedom over peaceful slavery, Northam prefers limp-wristed security theater. Virginia was once the epicenter of freedom, its flag and commonwealth seal feature Virtue, spear in hand, standing on the neck of Tyranny. The words Sic Semper Tyrannis (“thus always to tyrants”) inscribed below the defeated tyrant.

Sadly, that sentiment has been entirely abandoned by those controlling the Virginia executive and legislative branches. Let this serve as a stark warning to everyone, if you don’t get out and vote you could soon see the same thing happening where you live. If it can happen in Virginia it can certainly happen in your state.

Now, as much as ever, the eyes of the nation are on Virginia. Those attending the rally should realize the anti-gun media is looking for any reason to label gun owners as violent, dangerous or otherwise in need of regulation. Do not give them the soundbite they are looking for. We wish you the best Virginia, may you again become what you once were.

Previous article: Man Threatens To Kill People At A Party, Is Then Shot and Killed By Partygoer Next article: Wyoming Bill Would Ban Gun Buyback Programs