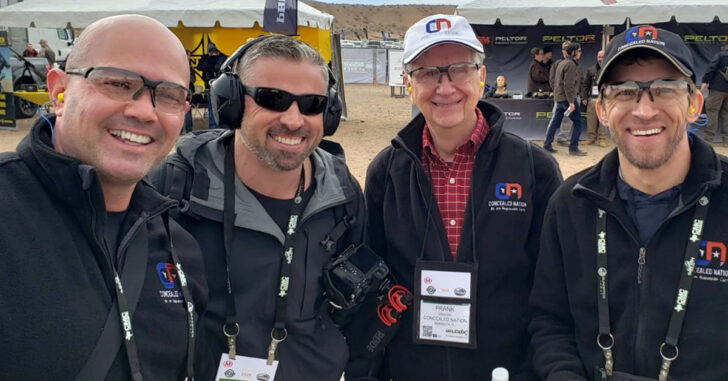 Our 5th year at SHOT Show was just as busy as the others, but we did take some extra time to walk the floor and check things out.

We covered… maybe 1/10th of the entire floor this year.

There were some highlights for us at the show, and we’ve put some videos together to show you some of the nice offerings.

PSA introduced their first-ever polymer handgun, and we truly can’t wait to get one for review. Starting at $299, these new 9mm handguns (one standard and the other allowing for optics) should be available to purchase in the coming months.

Not new to Concealed Nation readers, the Reach by Vara Safety is always a crowd pleaser. Leading the way in biometrics, their handgun/safe is something that I’ve been using for over 6 months now, every single day. It’s something to check out. You can start with our review.

Back in 2016, I met the folks at Mantis at my very first SHOT Show and was impressed. Since then, they’ve refined the system even more. Now, it’s over-the-top impressive. Be sure to check out this incredible and important training system that you can use both at home and at the range.

I’ve fallen hard for FN products. My first was the FNS 9c a few years back, and then the 509 midsize. New for this year, they extended the 509 line to include a compact version, and one that’s capable of adding optics. If you’re in the market for a reliable and compact handgun, you may be intrigued.

During SHOT Show, we had some camera problems. A few videos were lost, and the video for this new offering was among those lost. So, we’re embedding a video from USA Carry instead, and apologize in advance for you having to sit through Luke’s voice for the duration of the video. I’m kidding of course, but anyway, the real star here is the XDM Elite 3.8″.

I’m sorry. Again with Luke. I was next to him during this demo, but his camera wasn’t having a seizure like mine was. Anyway, moving on. The PSA5 was a pretty exciting thing to check out, and while not in the world of concealed carry (debatable), it’s worth a look for sure.

Kenny, the bald guy, was introduced to his first SHOT Show. He tagged along to get a feel for what the show was about, and to get him in front of the camera for future encounters with Concealed Nation. That’s right; you may have to get used to seeing him in the future. Either way, the trip was an overall success, but success never comes without bloopers.

Previous article: Woman Shoots, Kills Her Rapist As He Was Trying To Kill Her Brother; Faces Life In Prison Next article: Mom Shoots, Kills Adult Son After Altercation Outside Her Home