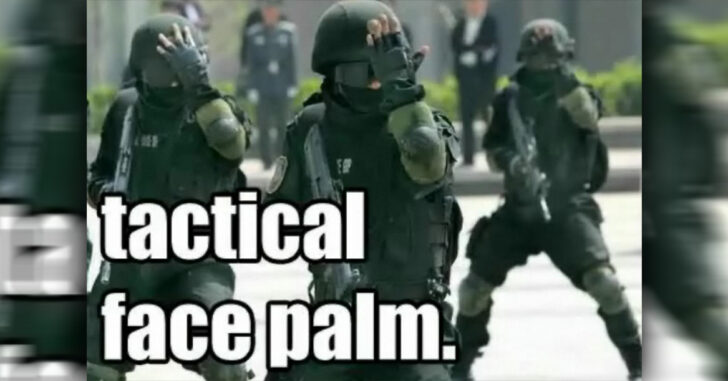 CHARLESTON, WEST VIRGINIA — Stop it. Stop putting your gun in your back pocket and pretending that’s a safe practice. It’s not. And yet another concealed carrier had to figure that out the hard way when his Springfield Arms XDM .40-caliber handgun “discharged itself” while he was attending a children’s swim lesson at the University of Charleston.

During the swim lesson, children and parents immediately feared for their own lives when a dude’s gun went off.

via the Charleston Gazette-Mail

“This man was sitting not 2 feet away, and his gun went off,” Kay said, recalling what her daughter told her. “She said he had a huge hole in his pocket. Everyone was upset. It could have been a terrible tragedy for many people.”

Guns are prohibited on the University of Charleston’s campus, the Gazette-Mail reports. And Randy Ross, the director of public safety on campus said the man had a valid concealed carry permit.

What the heck, man?!

Seriously. Why do we have to continue pretending that this sort of action is in any way appropriate for both responsible concealed carry and the safety and well being of others?

The director of public safety even commented that if the man had just used a proper holster for the gun, this entire thing likely would have never happened.

“It’s very hard to do that with that weapon,” Ross said. “Weapons don’t just go off like that. It’s almost something like you have to consciously do and I know that that wasn’t the case.”

When a concealed carrier does something like this, it calls everything into question — from the role of why we carry concealed all the way down to why institutions decide to idly ban us from going places because of a perceived fear of the misuse of those firearms.

This guy then had the audacity to say he was “traumatized” after the fact. If he was so traumatized, maybe he could have used the two working brain cells he must have had in his brain to rub together and come up with a plan to prevent that ever from happening.

Safe handling of firearms is the very first principle in carrying a firearm — concealed, openly, or where-ever. For concealed carriers, that includes a holster that maintains retention over the pistol and protects the trigger guard.

We’ve covered a LOT of negligent discharges in just this past two weeks. Do you think those are articles we’re looking to cover? Absolutely not. We LOVE to hear stories and report them to you about concealed carriers doing what they’re characteristically best known for: being the good guy with a gun when the bad guy shows up.

That’s ultimately why most of us carry — we take an avid interest in our own personal protection and that of our family and loved ones. And to that effect, we seek training and constantly take measures to combat complacency.

For THAT concealed carrier, the Charleston police plan on pressing charges. Once those charges go through, he’ll have a lot of fun dealing with private civil litigation surrounding the needless endangerment of other people’s children and their own well-being.

Train how you intend to fight. Use proper safety equipment that includes a high retention concealed carry holster that protects the trigger guard. Always abide by the four basic principles of firearm safety. That’s how you avoid a negligent discharge.