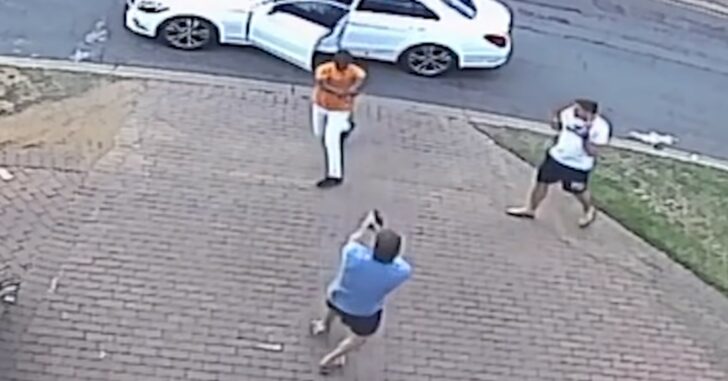 If there’s anything we’ve learned from surveillance video, it’s that most self-defense incidents happen extremely quickly. Having any advantage is the way to go, and many of those advantages require education and training.

For this incident, we’re going to talk about carrying with a round in the chamber here, and let John from ASP discuss the rest in the video.

The video shows us two men outside, talking in the driveway. A vehicle pulls up and a man gets out, first with a handgun pointed down.

The guy in the blue instantly realizes that he’s up to no good and steps back while drawing from the appendix position. He’s got a relatively quick draw and a round in the chamber.

At the same time, the bad guy raises his gun and seems to try and rack his slide when he realizes that his intended target is armed. While I’m not 100% he’s racking the slide, it sure does look that way.

In any event, that 98% certain slide rack gave the good guy ample time to get off the first shot, a shot that he took from a position of vulnerability. By that, I mean the bad guy already had an advantage with gun in hand.

If you’re ready to fight at a moment’s notice, that means that you’re on alert and your first round is sitting comfortably in the barrel of your firearm.

Previous article: Why Red Flag Laws Can Cause So Many Problems, And Will Next article: Serial Violent Criminal Guns Down Own Sister Over Car