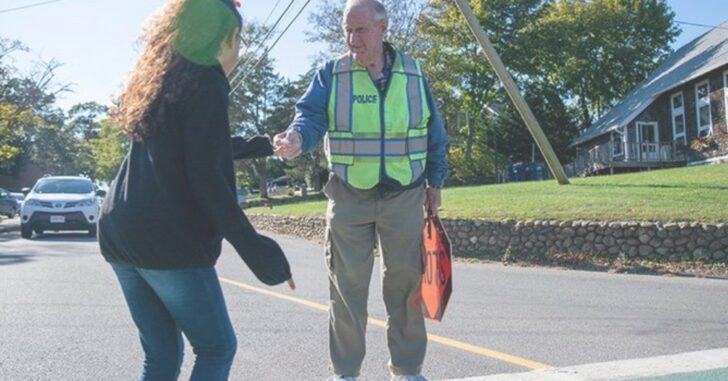 Stephen Nichols, an 84-year-old Korean War vet, retired cop and current school crossing guard is having lunch at the local diner with a friend. He talks about work and voices disapproval of his school’s resource officer who’s been ducking out for coffee during school hours.

And his comments are overheard by a waitress . . .

Nichols said he was unimpressed with the Tisbury School resource officer’s alleged trips to Xtra Mart to get coffee when children came to school in the morning. While dining at Linda Jean’s a couple of weeks ago, Nichols said he told a friend about this and suggested somebody could “shoot up the school” in that officer’s absence, which he described as “leaving his post.”

Nichols said the waitress made a complaint to Tisbury Police about what she overheard and on the strength of that, [Tisbury Police Chief Mark] Saloio and another officer relieved Nichols of his crossing guard duties while he was in the midst of performing them and subsequently drove to his home and took away his firearms license and guns.

Nichols has been reinstated after a hearing yesterday, but his firearms haven’t been returned yet.