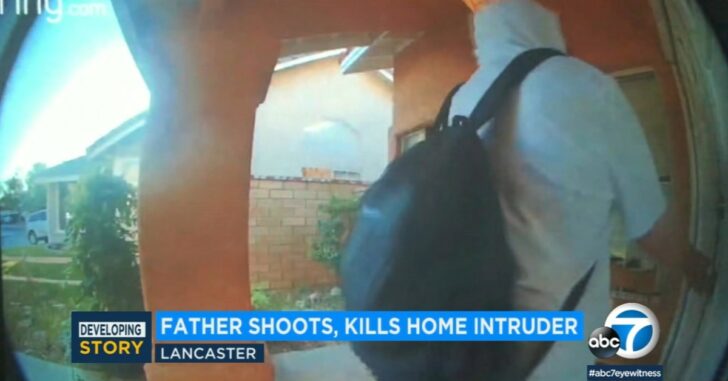 LANCASTER, CALIFORNIA — While some will comment that the title of this article is unnecessary, it’s blunt and to the point. It shows just how ready the millions of Armed Americans are, and what they’re willing to do when someone attempts to invade their home.

Around 6:45 am Sunday morning, the suspect, identified as 27-year-old Michael Lashomb, gained entry into the home via a downstairs window. He then walked into an upstairs bedroom, but didn’t make anymore progress.

The father was at home, along with his wife and children, and he grabbed his firearm at the first sign of trouble.

He shot the suspect once, striking him in the head. He did not survive.

Police say it appears that the same suspect was trying to break into other homes prior to this one.

In a state such as California, a small portion of residents own firearms, compared to much of the Country. This is, in part, due to the restrictive nature of their gun laws.

It’s nice to see an armed homeowner able to successfully defend himself, his family and his home. We never want to hear of anyone being killed, even the bad guys, but it’s an occupational hazard if you’re going to make the decision to break into someone’s home.

As soon as that happened, as far as this father was concerned, it’s his family or the bad guy. And guess what; he’s going to choose his family over the bad guy every time.

Neighbors told reporters that the incident left them feeling uneasy and less safe, but they understood the decisions that the father made.

“I would do the same thing,” said one of their neighbors, Darrell Jones.

This is just one of many home invasion stories that we’ve covered over the years, and always brings up the question; How close if your firearm to you when you’re at home? If it’s not readily accessible, such as is true for some households with small children, time yourself. How long does it take you to access your firearm and have it ready to go? The results may surprise you, and you could find yourself re-thinking it’s location and access.