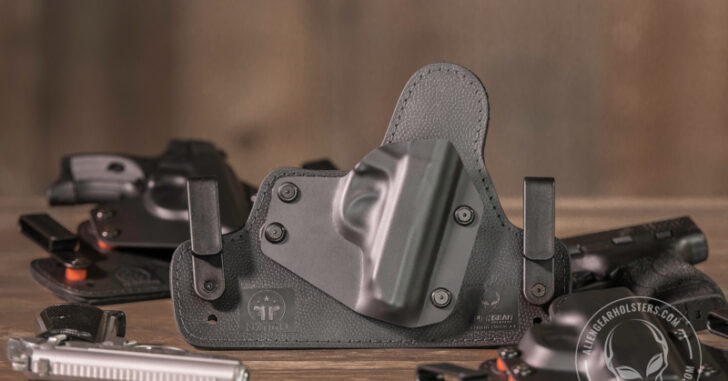 The handgun is the most effective form of personal defense a person can carry and it is the use of this weapon by law-abiding citizens that takes priority here at Concealed Nation. Unfortunately, there exists many politicians and their hordes of useful idiots who seek to trample our Second Amendment leaving many jurisdictions in this country where law-abiding citizens can’t go armed with a handgun. Therefore, we should all be politically active in the effort to overturn these holdouts of unconstitutional injustice. In the meantime, how should armed citizens cope when unfortunate enough to have to spend time in such environments? Well, most of us will inevitably face times when we can’t carry a handgun so we should seek other tools for such situations. This article suggests ways to integrate alternative weapons into your life for such occasions when you are subject to spending time in restricted environments.

Many people carry a gun but when they need to spend time in a jurisdiction or particular establishment that prohibits firearms they will strap on a different, and relatively unfamiliar, weapon. The problem with this practice is that alternate weapons that are only carried occasionally are usually not trained with and are often carried in unfamiliar locations on the body. For example, perhaps you carry a gun in your waistband as your routine defensive weapon, but when traveling to restricted environments you tuck a tactical folding knife in your pocket. Have you ever trained to proficiency with that knife so that you can deploy it rapidly or so that you will even reach for it if taken by surprise in a bad situation? My recommendation to those who need to carry an alternate weapon on occasion is this: carry that alternate weapon daily even when carrying your gun so that when forced to leave your gun behind you are still carrying your secondary weapon rather than an unfamiliar weapon.

I am a firm believer in carrying a scalable defensive tool set. What I refer to here is a carry system that allows you to scale down your daily tools to accommodate restricted environments. I carry three weapons on my person the vast majority of the time: a handgun, a knife, and a tactical pen. The handgun is, of course, my primary weapon. The knife can serve as a defensive tool, although I primarily carry it for emergency cutting needs, such as freeing someone from a seatbelt. The tactical pen serves as a less lethal force tool if need be, and is also a writing tool that I use daily anyway. I also carry a flashlight which is a tool that anyone serious about personal safety should carry every day.

Between these four items I can be armed with at least some type of defensive tool beyond just bare hands in most environments. If I can’t carry my gun in a certain location I can usually carry my tactical pen, light, and my knife. In very restricted environments I may not be able to carry a blade, so at least I can carry the pen and flashlight almost anywhere except airplanes as the TSA has cracked down even on tactical pens. While a tactical pen is not the equal of a firearm or an edged weapon, it is a significant force multiplier compared to only bare hands and it can be an excellent focused impact weapon in trained hands. This is the sort of carry system I recommend; a brace of defensive tools that can be scaled down to accommodate restricted environments. All four tools serve a purpose for daily carry, so by selecting the right tools you can work within a familiar set of defensive options that covers all situations.

Obviously I don’t share my own tool choices with you to infer that they are the best choices for everyone, I only share them to illustrate that my tools prove quite flexible. Perhaps you carry a firearm, an edged weapon, and OC spray. I highly suggest carrying a less lethal option at all times even when carrying a gun and knife, be it pepper spray or a focused impact weapon. Therefore, between carrying a firearm, blade, and less lethal option daily you are carrying a tool set that is flexible and practical. Tools that are carried daily are familiar. You should be sure to carry all of these options in consistent body locations and train with deploying these items efficiently so that the draw stroke for all options remains natural.

Most people do not fully consider how vital the practice of consistent carry mode is. Under stress and when taken by surprise you will reach for a defensive tool in the location it is typically carried. However, even if you carry a scalable tool set you may still need to work in an alternate weapon on occasion. If this is the case a good approach is to carry the alternate weapon in the same location as your usual weapon. For example, if you typically carry a gun but do not routinely carry a knife then carry a knife, if permissible, in the location of your usual firearm when in the restricted environment. A knife like the Ka-Bar TDI lends itself to being drawn similar to a handgun due to its grip angle. This similarity in draw, combined with the same carry location, will minimize the transition to the different weapon.

Be aware of the fact that some locations in our country are absurdly restrictive and even prohibit chemical sprays so know the laws in the locations you travel to. The carry of knives can be almost as tricky as the carry of firearms, so know the knife laws in the jurisdictions where you travel. However, by adopting a flexible tool set for carry we can maximize our familiarity and training with the weapons we utilize on a daily basis and minimize our transition to unfamiliar weaponry for restricted environments.

Let me also say this in closing: having some unarmed combative skills should be a priority for anyone who carries weapons for self-defense. While we have discussed the carry of alternate weapons your own body may be the only weapon available in certain situations, or may be the only means of protection even when armed if you find yourself at contact distance with an opponent. If you have no training in combatives seek this out. So, do any of you have suggestions for alternate weapons and the carry of such? Share those with us.

Previous article: *WARNING: GRAPHIC* Man Attacked By Grizzly Bear, And Why His Pistol Couldn't Save Him Next article: The Conversation on Self-Defense: Tips for Motivating Others