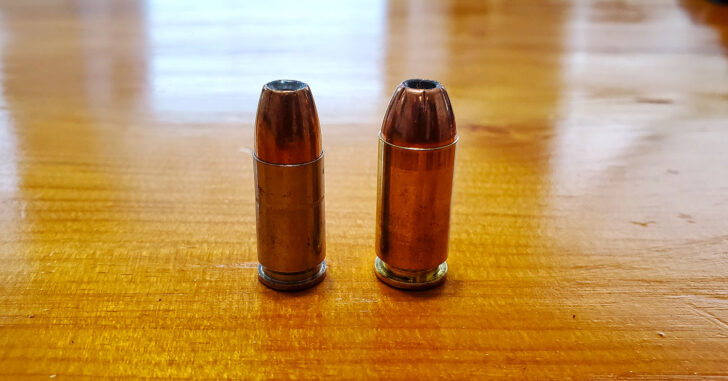 I came to another conclusion a long time ago, that I was tired of the caliber debate. A never ending saga on which caliber is best for concealed carry, and most make their talking point about stopping power.

But let’s get real for a moment; it’s 2019 and we have a wealth of technology in the gun world, including new firearms and better-performing ammunition.

I’m going to settle it once and for all. At least for concealed carry.

When it comes to carrying a firearm, especially concealed, size is very important. The smaller the better, for the majority I feel, however we don’t want to sacrifice the number of rounds just to have a smaller carry firearm.

And of course the smaller we go, the less rounds we have.

We’re now in a world with a seemingly unlimited number of choices for handguns that are suitable for concealed carry, and they’re getting better each year.

Sig Sauer came out with the P365, creating a smaller package while allowing for a crazy number of rounds. They were the first to really push the limits of a concealed carry firearm, and were met with praises across the industry.

Now, with the release of the Springfield Armory Hellcat, we have a slightly smaller size than the P365, but with one bonus; 11 rounds of 9mm instead of 10.

But just one extra round, does anyone really care?

One thing I’ve never heard someone say who has been in a gun fight: “I had too much ammo.”

Given the size of these new firearms, and the capacity, you’d be hard pressed (change that to impossible) to get the same amount of 40 or 45 caliber ammo in the same sized package. And that extra size makes a difference, especially seeing the way that the market is headed.

Plus, ammo across the board has come along way in terms of effectiveness and stopping power. The right 9mm cartridge, as an example, can arguably stop a threat just as well as a 45. Sure the 45 makes bigger holes, but let’s remember that it’s truly about shot placement over anything else.

I would, all day long.

The best caliber for concealed carry is, and has been for a while now, the 9mm.

Previous article: VIDEO: Family Of Armed Robber, Who Was Shot And Killed, Says Clerk Shouldn't Have Had Gun At Work Next article: Concealed Carrier Shoots Suspect In Head After Being Ambushed During Online Meetup To Sell Merchandise