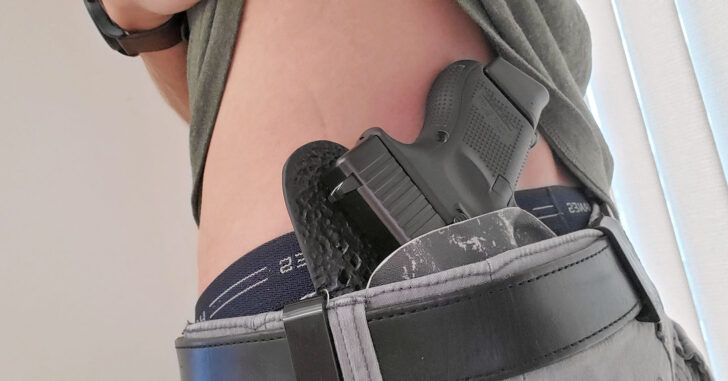 Your chances of being caught up in a mass shooting are very slim. So slim, in fact, that you’re much more likely to be a victim of a violent crime throughout your life.

That’s been the focus of Concealed Nation since the beginning; to help prepare armed citizens for the violent crime encounters that happen thousands of times a day in America.

We do cover a ridiculous amount of stories where armed citizens successfully defend themselves against the bad guys. But when a mass shooting happens, I find myself diving into the stories to pull them apart and see if the presence of an armed citizen would have made a difference.

In all truthfulness, there is never an answer. There is absolutely no way to know for sure if the presence of an armed citizen, who tried engaging the suspect, would have had any positive influence over the situation.

We do know that it’s happened on multiple occasions before, but to speculate for each incident that it didn’t happen… is not a good use of time.

Instead, we take the focus and bring it to the daily lives of armed citizens. These are people who, for the most part, will carry a firearm every day. And nearly everywhere they go.

Some leave them behind on quick trips, though, as we saw with at least two people present at the El Paso Walmart shooting earlier this month.

I’m not placing blame, or suggesting that either one of them could have made a difference. We don’t know and we never will. Many stars would have likely needed to align in order to successfully stop the gunman. It’s definitely not impossible, but it’s also pure speculation.

Instead, let’s look at how rare it would be to be in a situation like a mass shooting, and couple it with how not-so-rare it is to be a victim of a violent crime.

As an armed citizen, I will take my firearm with me everywhere that I am legally able to do so. Why am I doing that? It’s not because of mass shootings, but rather the day-to-day nonsense that I could be faced with.

Having it during a mass shooting that’s taking place is just an advantage.

Let’s be real for a moment and think about two scenarios;

First Scenario: You’re in line at a gas station when two armed robbers come in the front door and start demanding cash from you and the clerk. If you have the opportunity, you’re likely to draw your firearm and shoot at the first moment you feel it’s a good opportunity. They didn’t come in guns blazing, and it allows many to get a quick game plan together. The time may never come to make a move and that’s ok, but it’s not an overall panic.

Second Scenario: You’re inside a busy store and someone comes into the store and starts shooting. Your first instinct is likely to get somewhere safe. Not engage the gunman. That’s smart, considering that you’re probably well aware at this point that he’s there to do as much damage as possible. If you confront that without a plan, you could easily be an easy target for him.

The big difference between the two: The first scenario is likely a situation where the bad guys want to get in and out as quickly as possible, and part of their agenda is not to shoot anyone. In the second scenario, you’re up against an individual who is out for blood and will shoot anything that moves.

Do with that info what you will, but there are two main takeaways that I’d like to close with.

A few hours at the mall verses a quick trip to Walmart should be the same thing in the mind of an armed citizen. If we knew when bad things were going to happen to us, we’d adjust our lives in order to avoid them. Since we don’t, that leaves us at an immediate disadvantage. So, to properly cover our time as close to 100% as possible, it’s the best practice to keep that firearm with you, even on those quick little trips.

As an armed citizen, you should be getting a regular dose of training. Whether it’s on your own at a range or with someone in a formal setting, it’s important to maintain that very perishable skill of shooting.

Additionally, it’s not a bad idea to train for something like the first scenario above. It’s a rare encounter, a rare variant of the reason you probably started carrying, but don’t let yourself be the next person to say “I never thought it’d happen to me.” If you don’t seek out formal training for a mass shooting situation, at the very least get some training in the form of videos and articles online. Go through scenarios in your head, and get a feel for how you might react if you were in that situation.

So, concealed carry still means the same to me as it always has; a method of being more prepared if a threat comes into my life. As an addition, receiving a different style of training, for mass shootings, can only help you.

Most of us started carrying a firearm in order to defend ourselves against the more ‘common’ issues, such as a robbery. Some, however, have armed up in the wake of mass shootings.

Either way, carry as often as you can, and train like your life depends on it. Because it just might.

Previous article: Concealed Carrier At First Complies With Armed Robbers, Then Draws His Firearm And Shoots When They Turn Their Backs To Rob Clerk Next article: VOTE NOW: The Best GUN BELT in the History of Ever Survey - 2019