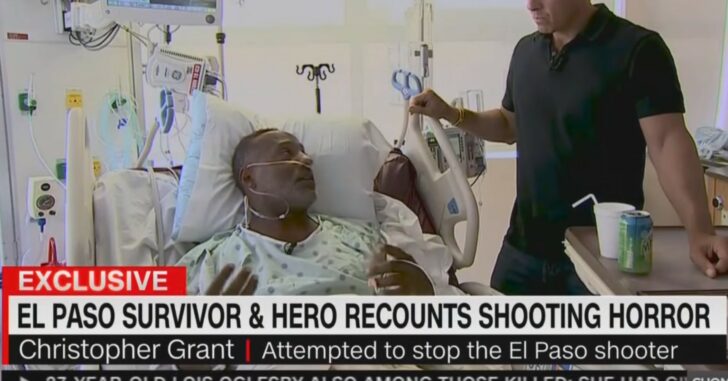 Quick trips to the store are usually just that – quick trips. You’re in, you’re out, and get home without any trouble. It’s a thing among armed citizens, sometimes, to decide whether or not they’re going to bring their firearm on such a quick little trip.

Last week, we learned of a man who was live-streaming inside the Walmart during the shooting. In the video, he informed the viewers that he wished he had his gun on him. Later that evening, he says that it was a big regret of his, being unarmed when he would normally carry.

Considering that this incident took place in Texas, I figured that at least someone would have been armed at the location. Whether or not they take action is another topic, but I was surprised to hear of a second person who usually carries a firearm but did not on that trip to Walmart.

During Cuomo Prime Time, Cuomo was interviewing one of the survivors at the hospital. What Cuomo probably wasn’t counting on was what the man had to say.

After he heard the gunshots, he ran towards his mother to try and shield her. He then has a thought to ask his mother, “Did you bring your gun?”

She carries a snubnosed Smith & Wesson 38 special … everywhere she goes.

Cuomo chimes in, “Not that day.”

An hour before we went to Walmart, she decides “Oh we’re just going to Walmart, I’m gonna go put it in my room.” So when I went to her, no gun.

Watch the interview below:

We preach, over and over; If you’re going to carry a firearm, carry it as often as you possibly and legally can. If we knew when bad things were going to happen, we’d just stay home.

The latest mass shootings are even more evidence of a need to carry for self-defense, and more of a push for other Americans to join the estimated 17.25 Million concealed carry permit holders that this Country already has.

This article is not meant to bash these people for not bringing their firearms. No one could predict what was going to happen, and it’s easy to leave a firearm behind because of a quick trip out of the house. This article does, however, serve as a reminder that we cannot predict the future. We should always be as prepared as we can be.

If either of these people had been armed during the rampage, there is absolutely no guarantee that a) they would have engaged the suspect or b) if they did, they would have been successful. That would all be pure speculation, but I’ll tell you this…

I’d rather be hiding armed, than hiding unarmed.