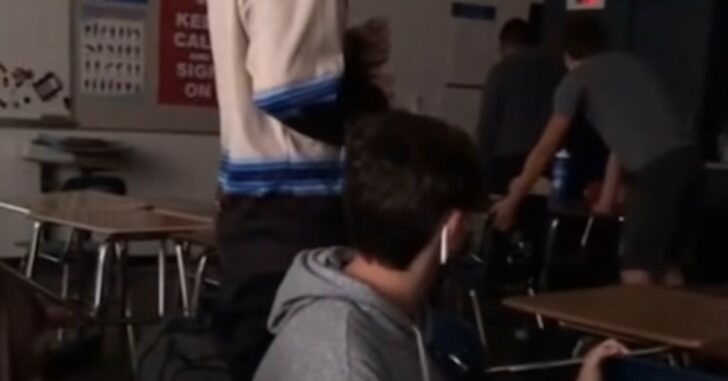 The shooting at Oxford High School that claimed the lives of 4 students and wounded 7 others on Tuesday was carried out by a 15-year-old student at the school who had a desire to kill students, according to a journal located in his backpack. During the rampage, police say he fired 30 rounds and shot indiscriminately at anyone he could.

Yesterday, cell phone video was shared on social media that shows students inside a classroom while their teacher is at the closed door talking with someone on the other side. That person claimed to be a police officer and told them to open the door and that it was safe.

The teacher wasn’t buying it, and neither were the students.

After the officer said the world ‘bro’ during the exchange, everyone began to panic and believe that it was the gunman pretending to be an officer. They proceeded to jump out of the window to safety.

As terrified as everyone must have been inside that classroom, I can’t help but feel that they all made the correct decision. The exchange of words was a little bizarre, but then again I’m not trained in what officers do as they’re evacuating a school. If I were a student in that room or the teacher, I’d likely have acted the same way.

It’s incredibly sad to see students in this situation, in a place where they should feel completely safe. These are the times I guess, and I’m just thankful that this killer was able to be captured as quickly as he was.

It would have been even quicker if an armed faculty member were on campus, but that’s a topic for another day (again), because it’s a topic that we’ve discussed numerous times over the years.