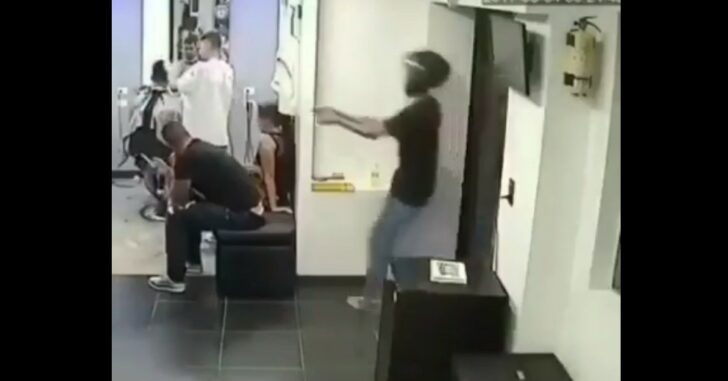 A video was shared on Facebook that shows a man sitting at a barber shop, presumably waiting for a haircut. The location of the incident is unknown, but some research suggests that it happened in Columbia.

Then, a man wearing a motorcycle helmet enters the building through the front door, gun already drawn.

The seated victim, who had his back to the door, had absolutely no warning of his impending death.

Here is a link to the video, viewer discretion advised.

If anything looks like a targeted hit, this would be it.

In any event, it brings up the age old question of where to position yourself while out at a place such as a barber shop, restaurant, or any other public location where you’ll be stationary.

Having that clear sight of entrances into the building is crucial. In many cases that we cover, the majority, the victims are innocent bystanders or the ones being directly targeted. But for different reasons.

For example, a person in line at the gas station and the clerk behind the counter. The clerk is likely the target, since he or she has access to the cash. The customer in line is a bystander, who may or may not become a target. If that customer is standing with their back to the front door, they are immediately at a disadvantage.

Keep your location preference in mind when going into any building, especially if you’re going to be sitting down or standing around. Keep a clear sight of the entrances, and be mindful of who is coming in.

Even if the man targeted in the video was armed, he had zero chance of a counter attack. With his back to the door, there was simply no chance of ever being prepared for what was to come.

Previous article: Man Shot In The Stomach After Allegedly Trying To Rob Woman At 5am On The Street Next article: Springfield Armory Announces Instant Gear Up Promotion